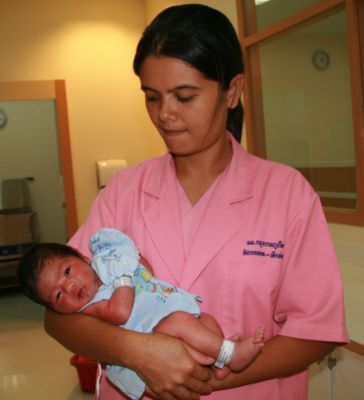 PHUKET CITY: A newborn boy was discovered yesterday morning in the back of a pickup truck in the car park of Bangkok Hospital Phuket. Doctors believe he had been abandoned the night before.

Dr Nat Tantipipat of Bangkok Hospital Phuket discovered the baby, wrapped in a towel and a blanket and placed in a red basket in the back of a pickup truck, at about 10:20 am.

He made the discovery during heavy rain and while many of the hospital staff were busy welcoming a celebrity at the hospital. The celebrity was none other than Wichayanee “Nong Kam” Peagrin, winner of the national TV talent quest “The Star”.

Dr Tantipipat said it was evident that the baby had been born in the early hours of Monday morning but had not been delivered by doctors as the umbilical cord had not been properly cut and that the wound was still fresh.

“Even though he had been wrapped up, he had many mosquito bites on his arms,” he said.

Doctors are keeping the newborn in an incubator until he can be transferred to the children’s hospice, Banpakdek Phuket, in about a week.

Banpakdek Phuket chief Tanyapon Aousaer visited the baby boy yesterday. The hospital has already filed a report with the police.

Hospital staff have yet to give the baby a nickname.

The boy is dark-skinned, weighs 3.140 kilograms and measures 51 centimeters in length.
A PGTV video of the baby boy can be seen here.