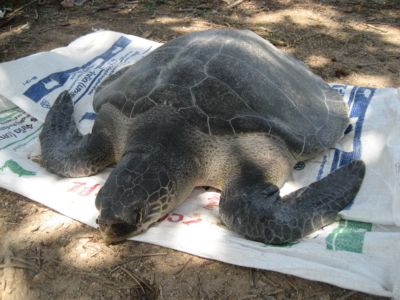 The Phuket Marine Biological Center (PMBC) at Cape Panwa was alerted to the discovery by the Mai Khao Marine Turtle Foundation.

Sontaya Manawatthana of the PMBC’s Marine Endangered Species Unit reported that many species of fish and squid were found in the dead turtle’s esophagus, with little in its stomach.

“This indicates that the animal ate this prey just before its death. The species of prey we found, which are typically caught by trawler, are normally too fast for turtles to hunt down, so it is most likely that the turtle fed upon these prey while in a trawler’s net…

“This turtle was an immature male, aged around 10 years. Its overall condition was healthy, which makes it so unfortunate he died like this…

“The Olive Ridley turtle is highly endangered in Thailand, where nesting numbers are even lower than the Leatherback turtle. Its only known nesting sites now are at Phrathong Island in Phang Nga,” he said.

“The situation is worrying. In the past five decades, the number of sea turtles has dropped five-fold. Beaches in Phang Nga and Phuket used to be places for sea turtles to lay eggs. Now, there are only 20 or so nests per year,” said PMBC biologist Kongkiat Kittiwattanawong.

Leatherback sea turtles used to be found on Phuket’s Mai Khao Beach. The Olive Ridley, the smallest and probably the most ubiquitous species of sea turtle worldwide, is at risk of extinction locally, he added.

The major cause for the plummeting sea turtle population locally is over-development of coastal areas for tourism, K. Kongkiat said.

According to the Marine and Coastal Resources Development and Research Center, the number of sea turtles coming to Thailand’s Andaman shores to lay their eggs has dropped dramatically to only 10-20 nests per year, decreasing from up to 1,000 nests in the past.

“Naturally, sea turtles will return to the same place they usually come to lay eggs. But they will not return if the place is not safe for them anymore. They will find a new, better place,” said K. Kongkiat.

More sea turtles are choosing to lay their eggs on beaches in Myanmar and Malaysia, where there is less human intrusion, he said.

As a result, sea turtle conservation efforts are not only increasing their numbers there, but also providing them with a good environment suitable for their living and reproduction, he added.