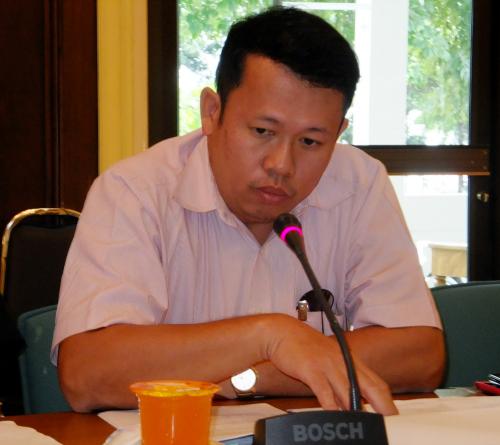 PHUKET: Five taxi drivers at Central Festival Phuket claim that they were threatened and suspended from working there by the leaders of the taxi organization that operates at the popular shopping mall.

The witnesses said they were verbally threatened and forbidden from working in the Central taxi queue, reported Karn Doonyalit of the Department of Special Investigations (DSI) on September 17.

The claims follow the arrests of the head of the Central Festival taxi group, Pom Sukkasam, and his brother on extortion charges on September 8. Both men have denied the charges and are out on bail (story here).

After the arrests, the taxi group at Central was reorganized under the direct management of the Central Festival administration. When taxi drivers were asked to choose a representative, they re-elected Mr Pom by an overwhelming margin.

Mr Pom told the Phuket Gazette that the five drivers in question refused to follow the queue system and rejected passengers who had a 10 per cent discount voucher from the shopping mall.

“These are the rules of our group that we all follow: taxis have to run on queue and cannot refuse customers. The first time they don’t obey the rules, we ask them to stop working with us for seven days,” he said.

“In this case, we suspended them for a week, and when they came back to work, they argued and fought with other members of our group. We discussed what to do about it, and decided to suspend them for a month,” he said.

DSI officer Karn’s comments came during a press conference updating the press on the ongoing campaign to weed taxi mafias out of Phuket. He also revealed the DSI’s next target: a taxi driver who ran into trouble with a Chinese tourist in the past.

“We are now collecting as much evidence as we can to arrest the suspect,” he said. He refused to reveal any of the details of the case for fear the suspect would flee.

Phuket father’s cash-quest was for wrong kind of drugs