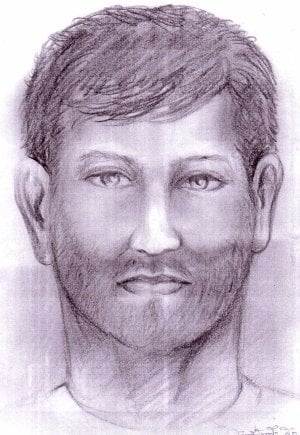 PHUKET: Police have released a sketch of what the prime suspect in the Wanphen Pienjai murder case may look like without a full beard.

Ms Pienjai’s naked body was found stuffed in a suitcase in Phuket on June 24.

She was last seen leaving her workplace at the Sweetheart Bar in Kata with a Caucasian man described roughly as being 35 years old, 175 to 180cm (5’9″ to 5’11”) tall with an average build, and having a brown beard and mustache.

A previous sketch showed the suspect as he may have appeared on the morning he was seen leaving the Sweetheart bar with Ms Wanphen on his motorbike.

Phuket City Police are offering a 50,000 baht reward for information leading to the arrest of the killer.

Anyone with information regarding the case should call the Phuket City Police at 076-212115. Or, if you speak English and need a translation to Thai for reporting purposes, call the Phuket Gazette at 076-273555 and ask for Khun Nee, Khun Jane or Khun Joy.