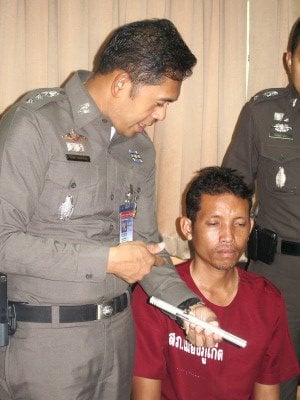 PHUKET: A construction site foreman has been charged with murder after allegedly shooting one of his laborers with a homemade pen-gun, police said.

The shooting happened about 9pm last night in the Phanson Villa (Bor-Rae) housing project in Wichit.

Arriving at the scene shortly after the incident, Phuket City Police officers found a single .38mm bullet casing and were told by witnesses that a man had been shot in the chest and was already dead before being taken to Vachira Phuket Hospital.

The victim was identified as 30-year-old Songphol Yurapan, from Sakon Nakhon.

Witnesses told police that the gunman was the victim’s boss, Phijit Hawan, 34, of Ubon Ratchathani.

After the shooting, Mr Phijit fled to the nearby labor camp, where he was arrested at about 10pm, police said.

Under police questioning, Mr Phijit confessed to shooting Mr Songphol with a “pen-shaped” gun he made himself.

Police said the pair had been close friends, but had fallen out over a 4,000 baht debt Mr Songphol had racked-up at Mr Phijit’s shop in the labor camp.

Police said that when Mr Phijit asked for his money back last night, Mr Songphol replied, “I’m not going to run away; I don’t have any money and I’m not going to pay. Shoot me if you dare.”

Mr Phijit, who said he had asked for his money back many times, allegedly got so angry that he responded to Mr Songphol’s challenge and killed him.

Mr Phijit has been charged with murder and illegal possession of a weapon in a public place.

New sketch of suspect in Phuket murder of Wanphen Pienjai