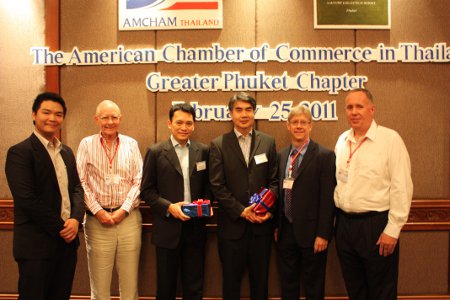 The keynote speakers at the event, entitled “Changes In Greater Phuket Planning and Environmental Regulations”, were Sorachon Boonsong and Kammalard Urapeepatanapong, partners at Baker & McKenzie, and Anurag Ramanat, a partner at South Asia Law.

At the core of the presentation were the “areas and measures” defined by new Environment Act regulations, effective from July 31, 2010.

The provisions govern the use of land in four “major tourist areas”: Phuket, Hua Hin, Pattaya and Krabi.

Mr Anurag also discussed new zoning regulations in Phang Nga, similar to those in Phuket, which went into effect on July 2, 2010.

The regulations designate nine “areas” on Phuket, each with different building restrictions.

“From our analysis, development and land value in Phuket may be significantly affected by the introduction of the Phuket Environmental Regulations, especially ‘mega-size’ hillside villas,” a Baker & McKenzie statement read.

“This impact is demonstrated by the stricter requirements in many aspects,” it continued.

Restrictions governing building height, free space requirements, and “slope area” are applied differently in each of the nine areas.

For a more detailed report, pick up a copy of next week’s Phuket Gazette, on newsstands March 4.

Among those in attendance were AMCHAM Greater Phuket Chapter committee leaders Bill Barnett of C9 Hotelworks and John Magee of the Phuket Gazette.

Introducing the keynote speakers, Mr Barnett said the creation of the Greater Phuket Chapter is “sending a message to Bangkok that Phuket is serious about business.”