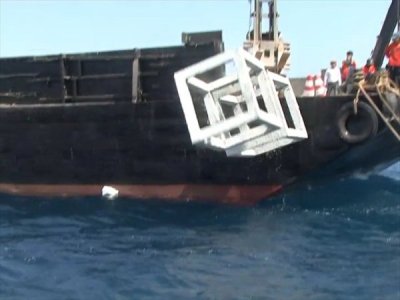 MAI KHAO, PHUKET: The Department of Marine and Coastal Resources has sunk 1,310 concrete blocks into the Andaman Sea off Phuket to create an artificial reef aimed at protecting the marine life of Sirinath National Park.

The reef lies 3,000 meters from the coast, marking the area where sea fishing is forbidden. It extends from Sarasin Bridge in Mai Khao in the North of Phuket 20 kilometers South to Nai Yang Bay.

As well as protecting and restoring marine life, it is hoped the reef will become a dive site in years to come.

The Phuket Provincial Administration Organization (PPAO) has funded the project at a cost of 5,694,000 baht.

On Tuesday PPAO President Paiboon Upatising chaired the opening ceremony for the project, which is officially named ‘Artificial Coral for Her Majesty The Queen’.

Charuay Inchan, chief of Sirinath National Park, said coral reefs, which were important for the ecology of the coastline, had been destroyed.

“The blocks of concrete will protect and mark the 3,000 meter forbidden zone from those fishermen who use otter trawls or seines, which destroy the ecosystem,” he said.

Breaking through: Phuket road near completion