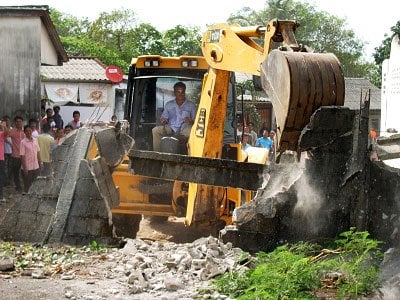 WICHIT, PHUKET: The final stages of construction are set to begin on a long awaited road connecting the bypass road near HomeWorks to Ekwahnit Road behind Surakul stadium.

Phuket Governor Wichai Phraisa-ngop swung the project into action by helping demolish a wall with a sledgehammer on March 24.

The 550-meter-long road, running behind Darasamuth School, was expected to have been finished long ago. However, a family squatting on land needed for the road held up completion of the last 65 meters.

A meeting was held last December in which Wichit Municipality agreed on building two new houses on adjacent land for Chamnan Rungklin and his family.

Construction of the houses was made possible through donations from private and public organizations, including the Phuket Provincial Administration Organization (PPAO).

“I’m happy with the houses. Although they are a bit smaller [than our previous house], they are more comfortable and look nicer,” Mr Chamnan told the Gazette, after moving into the new houses about a week ago.

The mayor also thanked all who helped relocate the Rungklin family.

Governor Wichai said he expects to see the road completed before the Songkran festival next month.