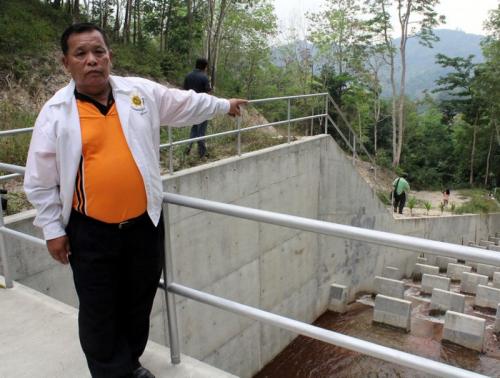 PHUKET: Construction issues plague the Klong Pee dam project in Chalong less than a year after it was completed at a cost of over 10 million baht.

Villagers complained to the Irrigation Project of Phuket, but after nine months of silence have turned to the Phuket Governor and the Phuket Press Club for help.

“On February 15 of this year, we filed a complaint to Phuket Governor Maitri Inthusut asking him to examine the dam,” Chalong Kamnan Charoen Taewabutr said. “More than 10 million baht was spent on the project and if it doesn’t work – the money we spent was for nothing.”

“After it was finished, we realized there were a lot of problems with it, such as not being able to open or close the water gate when it rains heavily because sediment washes against it and blocks it. And some parts of the dam are already being eroded away,” he said.

In May 2012, Chalong villagers filed a complaint with the Irrigation Project of Phuket but have not received any response, which is why they have come to ask help from Governor Maitri, Kamnan Charoen said.

“It is a shame the dam cannot be used. I would like all relevant organizations to help us fix this problem – right away,” he added.