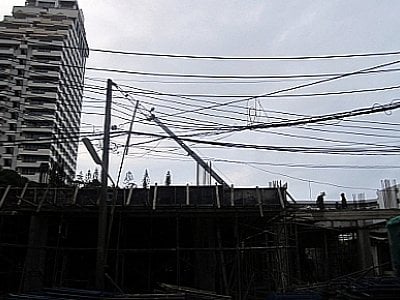 PHUKET: Construction of a new 69-million-baht wing at Patong Hospital, that will double the facility’s inpatient capacity, is well underway and scheduled for completion by August next year.

“The expansion is needed because the number of patients keeps on growing due to the town’s continually increasing population,” said Dr Phumin.

Construction of the building started at the beginning of this year. “Actually, the project should be have been completed six months earlier, but the central government announced that all ‘non-essential’ projects were to be put on hold due to the terrible floods last year,” Dr Phumin said.

The hospital director said the new wing would offer welcome relief to the burden on the existing 60 inpatient beds and 12 private rooms.

“We will be able to offer even better services than we do now. We will have more specialists, such as orthopedists, ear, eye, nose and throat specialists, internists and pediatricians.

“Within a couple of years, Patong Hospital will have its own specialist gynecologist,” he added.

The boost in capacity will also reduce the need to transfer patients to other hospitals for better treatment, said Dr Phumin.

“Our services and medical equipment will be more effective in providing better quality medical services. The old building will be used as usual,” he explained.

“Having a better hospital in the area means providing a better quality of life to the people,” Dr Phumin added.