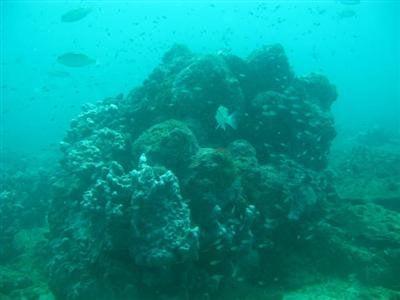 PHUKET CITY: A new coral reef covering an area almost the size of two soccer fields has been discovered off the coast of Phang Nga.

The reef was discovered by fishermen around five nautical miles west of Kho Khao Island in Phang Nga’s Takuapa District. The reef lies at a depth of about 21 meters.

Mr Chaimongkol Yaemarunpattana, a coral researcher at the Phuket Marine Biological Center (PMBC), was part of a diving team that surveyed the reef on Monday.

“The reef’s fertility is average,” he said. “We found mostly encrusting corals, tabulate corals, several species of fish and four or five octopi.”

Mr Chaimongkhol said the reef was ‘very attractive for diving in general’.

The Phang Nga Tourist Association, together with the Marine and Coastal Resources Conservation Department (MCRCD) and the Department of Fisheries, has started a project at the new reef and others in the province called ‘Nemo Returns’.

The project will involve introducing new fish to the reefs and carrying out cleanups in order to improve dive spots, thereby reducing the number of divers around the popular Similan Islands.