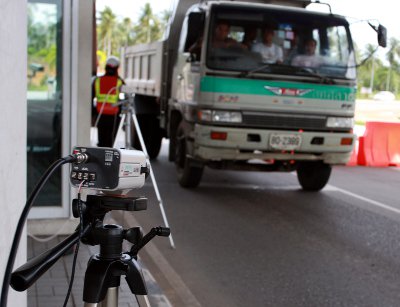 PHUKET: Phuket Provincial Police Commander Choti Chavaviwat today announced that inspections of vehicles passing through the Tah Chat Chai police checkpoint – located on the only road linking Phuket with mainland Thailand – will be subjected to more stringent searches in order to boost security.

“The Tah Chat Chai checkpoint is on the only road in and out of Phuket, so I have ordered Tah Chat Chai Police Superintendent Weerawat Jantarawijit to be more strict on conducting inspections at the checkpoint,” Maj Gen Choti told the Phuket Gazette.

“Police are already drawing up plans for the changes to be made at the checkpoint, which will use police checkpoints in Singapore as a model,” he added.

More signs warning motorists to reduce speed for the checkpoint ahead will be installed, as will more road-safety devices, such as speed bumps, to ensure motorists actually do slow down.

“All vehicles entering and leaving Phuket must be recorded by CCTV, but a third lane will be added to make sure emergency vehicles can pass through quickly without having to queue,’ Maj Gen Choti said.

“Police will implement the changes bit by bit in order to minimize the effect on motorists,” he added.

“We will not inspect every single car passing through the checkpoint, but suspicious vehicles will be searched thoroughly,” Maj Gen Choti said.

“We will make sure nobody can escape Phuket once they get in,” he warned.