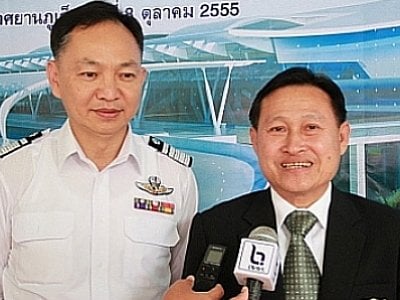 Mr Prathuang told the media that the already overcrowded airport would be even more jammed than usual as, adding to the 35 regular airlines and eight charter airlines, seven additional airlines would be handled by the airport from October to December.

“This overcrowding will affect passengers. However, to help alleviate the situation we intend to use other available space where possible.

“We have to apologize for the situation,” he said.

Looking on the bright side, Mr Prathuang said, “By April 2015, the new terminal will be completed and capable of handling 12.5 million passengers a year. The building will impress passengers and put an end to the overcrowding.”

AOT Executive Vice President (Regional Airports) Acting Sub Lt Naris Yoadchan added his apologies for the inconvenience to travelers during the expansion work, which he said would begin this month when the first of the foundation piles would be driven into the ground.

“In the year up to last month we made 1.7 billion baht profit, that is 20mn baht more than the previous year, and we expect that to increase that by 10 per cent in the next financial year,” explained Lt Naris.

“Some of that has been allotted to the airport expansion project, which will put Phuket International Airport on par with Suvarnabhumi Airport,” he added.