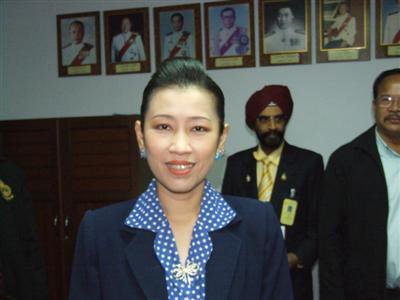 PHUKET CITY: The new Chief Justice of Phuket Provincial Court held a press conference yesterday to promote greater use of the court mediation system to settle legal disputes, the backlog of which is overwhelming the provincial court system and leading to long delays between trial dates.

Phuket Provincial Court Chief Justice Varangkana Sujaritkul said she will promote the use of the mediation system to reduce the caseload currently burdening the court’s 18 judges.

Last year 9,000 cases were filed with Phuket Provincial Court, about 6,000 criminal cases and 3,000 civil suits. Some 20% of the total involved foreigners, she said.

To increase public awareness of the mediation system and promote its use, Chief Justice Varangkana will lead a seminar on the topic at the Royal Phuket City Hotel on June 9. Representatives from various clubs and associations have been invited to attend.

She stressed that the mediation system can be used to settle all legal disputes, with the exception of those involving national security issues like narcotics, money laundering and human trafficking.

In a related development, Chief Justice Varangkana urged her colleagues who enjoy playing golf not to do so at the Blue Canyon Country Club, which has for five years been at the center of a bitter ownership dispute.

Phuket Provincial Court is still investigating evidence in the case between Singaporean businessman Sia Leng Yuen and former partner Rawat Chindapol and has yet to specify when a ruling will be made, she said.

“It is not good that the judges are playing golf at the course, as they may be seen as taking sides with one party in the dispute,” she said.

Unfortunately, neither side in the Blue Canyon dispute is interested in resolving the case through mediation, she said.

Chief Justice Varangkana has been in her current position since April this year.

“I will fulfill my duties to the best of my abilities to serve all the people of Phuket, just as my uncles did before me,” she said.

Chief Justice Varangkana represents the third generation of a well-known family of adjudicators, many with experience in Phuket.

Her uncle Piyachart Sujarikul served as Phuket Chief Justice from 1971 to 1973.

Another uncle on her father’s side, Pridi Sujaritkul, held the same post from 1980 until 1982, when he was shot and killed. The case, which was never solved, was thought to involve a land dispute.

A Bangkok native, Chief Justice Varangkana’s transfer to Phuket followed a one-year assignment in Ubon Ratchathani where she also served as Chief Justice.