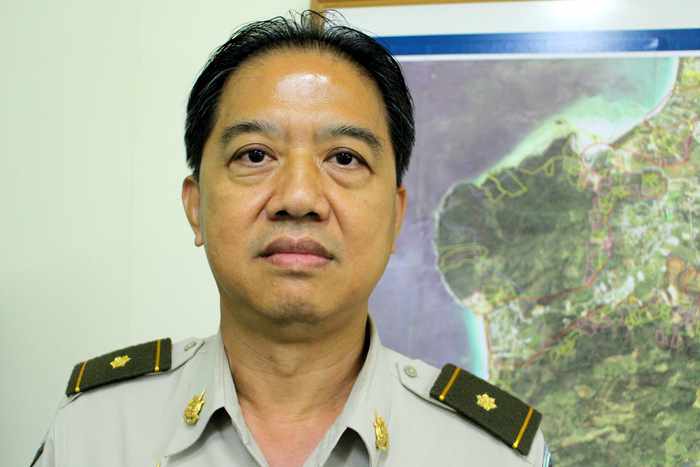 PHUKET: Navy security personnel have been assigned to protect Sirinath National Park Chief Kitiphat Taraphiban after his office was warned that professional hitmen have been hired to kill him.

The 24-hour military bodyguards were called in after Mr Kitiphat’s assistant was told over the phone that “five M16s are ready to get him [Mr Kitiphat] over beach restaurants”.

“The caller said that two hired professional gunmen were already on the island: one from Surat Thani and one from Nakhon Sri Thammarat,” Mr Kitiphat told the Phuket Gazette this morning.

“We were told that four others hired from Phretcha Buri province will arrive tomorrow.”

Police and military investigators are working together with Mr Kitiphat and his team of park rangers to identify the caller and hopefully avoid an assassination attempt.

Mr Kitiphat explained that the warning was delivered when the caller phoned his assistant’s personal mobile last Thursday.

“We are working together with police from the Central Investigation Bureau. Some restaurant owners have been questioned, but no one has been charged. As soon as we can reveal more information, we will,” said Mr Kitiphat.

In the meantime, the park chief will continue working as usual.

“I am not afraid of being killed,” Mr Kitiphat told the Gazette.

“My priority is reclaiming our national treasure. My assistant and I had a talk, and we agreed that it was worth our lives.

“My kids are all grown up. I have nothing to worry about. I have talked to my family. This is my job. And everyone dies.”

Mr Kitiphat vowed that fighting encroachment was his top priority when he became chief of Sirinath National Park in May (story here).