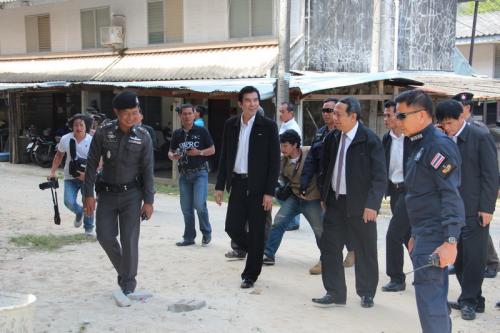 PHUKET: Royal Thai Police Department of Special Investigation (DSI) Director-General Tharit Pengdit arrived in Phuket yesterday as part of his investigation into the stalled construction of 163 police housing apartment blocks across the country.

With him was Government Spokesman Prompong Nopparit, who is also vice president of a parliamentary anti-corruption committee set up by Pheu Thai.

“We will be looking at the delay in construction and will also determine whether corruption is involved, said Mr Tharit, adding that the case had attracted the attention of national police chief Adul Sangsingkaew.

Mr Prompong described the project as “wrong from the beginning.”

“Only one company bid on this project, PCC Development and Construction Co Ltd,” he said. “The bidding process looks suspicious.”

“I received complaints from police officers in Phuket about financial hardship because rents in Phuket are quite expensive and they have been waiting for the police housing for a long time,” Mr Prompong said.

This is not the first time the construction has come under scrutiny.

Gen Choti said that construction began on the three apartment blocks in April 2010 at a budget of 68.1 million baht. The original deadline was June 24, 2011.

On March 15, 2012, Region 8 Police in Surat Thani ordered the construction stopped. “We received the order to stop the construction because they wanted to make sure it was up to code,” Gen Choti said.

“Officers from the Department of Public Works, Town and Country Planning in Bangkok, and the Phuket Provincial Public Works Office came to check the buildings.

“After that, we received permission from Region 8 Police to resume construction,” he said.

“Region 8 Police gave the contractor 293 more days to complete the project. Later, they were given an additional 360 days,” he explained.

However, after construction stopped in March 2012, the contractor failed to resume work. “We have not seen any workers at the construction sites since March 15, 2012,” Gen Choti said.

Mr Prompong said he would submit his report to the Anti-Money Laundering Office next week and ask them to verify the budget and the financial process used in the construction.