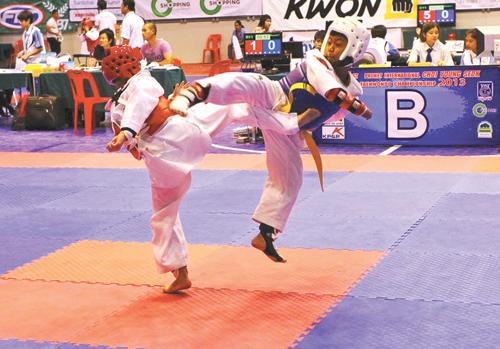 The event attracted more than 1,500 competitors from Thailand, Korea, Russia, Kuwait and Australia, among others. Traditionally held in Bangkok, the organizer, and Thailand’s national taekwondo coach, Choi Yong Seok, says he wanted to branch the sport out to Southern Thailand.

“Every week in Bangkok there is a sports competition,” Choi Yong Seok told the Phuket Gazette. “But in Southern Thailand, they have very few competitions. Phuket is famous for tourism, but not nearly as much for sports activities.”

A Korean national, Choi began working with the national team in February 2002 and coached Yaowapa Burapolchai to win Thailand’s first Olympic medal in taekwondo, when she claimed bronze in the women’s 49kg division at the 2004 Athens Games. Four years later in Beijing, Buttree Puedpong got silver in the same class.

Choi splits his time between coaching the national team and lecturing classes in sports science at Kasetstart University in Bangkok. The national coach is currently training Thailand’s taekwondo team for the World Championships to be held in Mexico in June of this year, followed by the SEA Games in Burma in December.

The opening day of the 1st Phuket Taekwondo Championship featured primary school children. On the second day, it was the turn of juniors and seniors and the competition culminated in a team round between participating taekwondo clubs.

This may be the first and last time the event is held in Phuket as Choi Yong Seok encountered a number of problems organizing the championship. He says:

“When I met officials for Phuket City they were very interested [in hosting the competition] and they said the event should be held in Saphan Hin. I want to do it next year, again in Phuket, but we have had no support from Phuket City government for funding or anything, and Phuket is very expensive. So next year I don’t know if it will be Phuket or another city, like Chiang Mai or Pattaya,” he said.