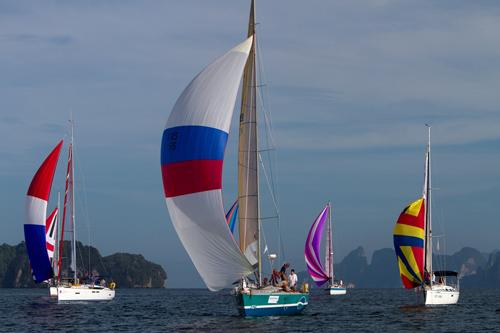 Once again, Jim Ellis proved what a wily ol’ sea dog he is by taking Cruising Class A on Remington, his Galatea 42. Richard Macfarlane’s Aida an Oceanis 411 was second and Lori Ashton’s Luna Sea, a Sun Odyssey 36i, placed third.

Gavin Wellman’s Halberg Rassey 53 Rascal raced to first in Cruising A with Barry Wickets on his Hood 23 Kay Sira coming in second and the irrepressible Gillow family taking third on Poco, their S & S 30 Swarbick.

The Bareboat Class saw Fidgi, a Sunlight 30, helmed by Peter Ohlemacher appear to take top spot. However, after some investigation by the race committee, it was discovered that they did not complete the early part of the course due to some late crew arrivals. So top spot was again taken by Kinnon, helmed by Russian skipper Nikiforov Eveni, with fellow Russian Igor Skvortsov finishing second on Uhuru, a Bavaria 46 Cruiser and Andy Dowden’s PIMEX Lawan taking third place.

In the three-race start sequence Cruising A, started with Racing Class, while Cruising B teamed with the Bareboats and Multihulls raced solo.

The Bay Regatta was founded by local photographer John Everingham and friends Chris Schaefer and Andy Stephens. Everingham, a long-time Phuket King’s Cup Regatta committee member, was motivated in part by frustration at the annual struggle over setting that regatta’s courses.

On the one hand, he wanted to shoot the fleet of sails contrasted against the dramatic scenery. The hard-core sailors, on the other hand, wanted their boats as far away from land as possible to avoid fickle winds. Dramatic photos would attract more sponsors, argued the photographer – but the sailors always won.

So the stymied lensman rounded up some like-minded friends and established a regatta designed to sail among the dramatic limestone island towers and mainland forests of the waters off Phuket’s east coast. The problem was that some time the courses would go too deep into the bay, where the wind didn’t blow. So when the ACYC gained control over the regatta a couple years back, a compromise was worked out between beautiful scenery and good sailing courses.

Few people have the ability to multitask the way Bay Regatta’s PRO (who determines the course) Simon James of Regattas Asia can. Simon, who along with his partner Kae Wattana, now runs the Samui Regatta, is the PRO at many of the region’s regattas and his ability to juggle courses, starts, the weather, malfunctioning boats, and the like, is remarkable.

Long-time Phuket sailor Barry Kennaugh has described the Bay Regatta as the “Party that sails around”, and it’s a very appropriate moniker as dozens of colorful spinnakers sail through some of the world’s most famous cruising grounds, enjoying spectacular scenery and partying well into the night at some of the region’s most beautiful resorts.

After a party the previous evening at the glorious Paradise Koh Yao Boutique Beach Resort & Spa, the boats set out this morning for a day’s racing only to return to Koh Yao Noi’s Villaguna Resort later that night.