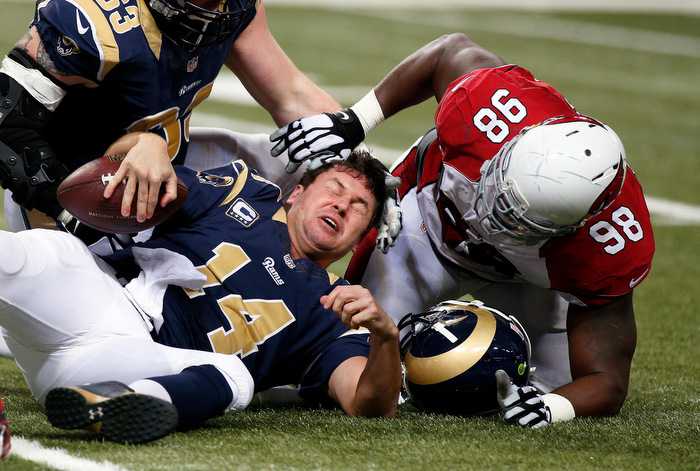 PHUKET: The Arizona Cardinals won their second straight game on Thursday night football by grinding out a 12-7 home win over a lackluster Kansas City Chiefs (7-6), but the win saw their quarterback Drew Stanton leave the game with a worrisome right knee injury.

The injury came as a big setback for the Cardinals, now 11-3, who had the best record in football until their starting quarterback Carson Palmer went down with a knee injury against the St Louis Rams (6-8) earlier this month.

In Thursday’s game, all the offense the redbirds needed came off the foot of placekicker Chandler Catanzaro, who split the uprights four times.

The anemic Rams’ offence was held to two short field goals and had five three-and-out series in the third quarter.

The strength of the Rams all year has been their defense. In fact, Catanzaro’s 23-yard field goal in the second quarter ended nine quarters of shutout defense by St Louis, which racked up huge wins against the Washington Redskins (3-10) and Oakland Raiders (2-11) by a combined 76-0 the previous two weeks.

In relief of Stanton, third string QB Ryan Lindley was very ineffective, but it didn’t matter in the end. The Cards will have to decide whether to start him again or hand the game ball to completely untested rookie QB Logan Thomas until Stanton’s return.

NFL Media Insider Ian Rapoport reported Friday evening that Stanton’s injure was a “Grade 2” MCL sprain and is expected back for the playoffs, per two sources.

Breakfast bowl: One of the biggest games of Week 15 will start at 8:30am local time on Monday, when the Dallas Cowboys travel to the Philadelphia Eagles in a key NFC East matchup (screened on NBC).

Both teams are tied at the top of the division with 9-4 records, but the Eagles won the previous contest on Thanksgiving Day in Arlington. It could be a “loser go home” match due to the Wild Card situation in the NFC and ever-improving play by Superbowl champs the Seattle Seahawks, now 9-4 and on a three-game win streak.

I don’t know why, but something tells me Cowboys quarterback Tony Romo is going to have a big game and lead Dallas to a win in this one.

Chargers vs Broncos (4:05am Monday, CBS): The Denver Broncos (10-3) will head west for an AFC West showdown with the San Diego Chargers (8-3). The Broncos will want to win in order to stay in contention for the number one seed in the AFC, meaning they would not have to travel to Foxborough, Massachusetts, to take on the New England Patriots (10-3), who beat them there solidly a few weeks ago and thus hole the number one seed.

The question for the Chargers, who lost to the Pats’ solid defense at home last week, will be whether they can generate a ground game. They need a win to stay in the hunt for a Wild Card spot.

Bills vs Packers (1am Monday, Fox): The Buffalo Bills (7-6) are one of the most surprising teams in the league this year based on having one of the best pass rushes in the league. Playing for their playoff lives at home against the Green Bay Packers (10-3), it will be interesting to see if their pass rush can get to future Hall of Fame quarterback Aaron Rodgers, who has been playing at a super high level for weeks.

Patriots vs Dolphins (1am Monday, CBS): Both the Miami Dolphins (7-6) and the New England Patriots (10-3) will be playing full-tilt in this one; the Pats to retain hold of the number one playoff seed in the AFC, and the Dolphins to remain in contention for a wild card spot.

The Dolphins beat the Pats in the home opener by getting to QB Tom Brady, but now the Pats have a much improved defensive line and will be playing in freezing Foxborough with revenge on their minds. It is worth considering that New England quarterback Tom Brady is 25-2 in December home games.