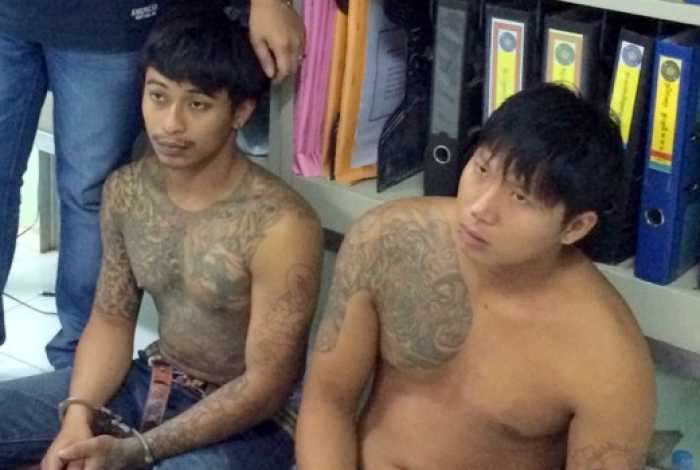 PHUKET: Police arrested two men on the streets of Patong early this morning after a spate of bag-snatch thefts were reported within minutes of each other.

Mr Theerayut was arrested on the beach road at about 3:10am, while Mr Sarawut was arrested in the street leading to the Patong Condo Tower, while trying to flee police, about three minutes later.

The pair were caught after three victims reported bags snatches in quick succession between 2:45am and just after 3am, said Col Jirapat.

“The victims gave descriptions of the attackers; all three reported that the snatch thieves were riding a red Honda Click motorcycle,” he noted.

When Mr Theerayut was arrested, he was found in possession of a handbag, purse, wallet containing 1,200 baht, an ATM card, an iPhone 4 and a Thai national ID card – all belonging to Thai national Chayapas Witchayachokanan.

When Mr Sarawut was arrested, police found on the ground nearby an ATM card, some cosmetics and an ID card – all belonging to a person named by police as Australian national Lucy May Isies Heardman.

The arresting officers also found on the ground nearby a brown handbag containing a wallet, two ATM cards, a mobile phone and a Thai National ID card – all belonging to Thanitha Soponnun.

“Both men confessed to committing the snatch thefts,” Col Jirapat said. “And both have been charged for the thefts.”