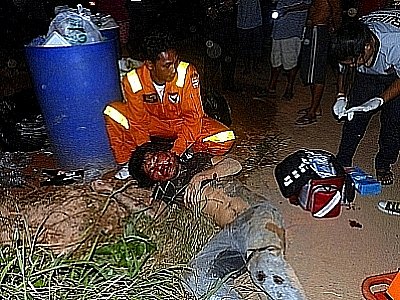 PHUKET: Phuket Police have launched an investigation after a man with severe head injuries was found, apparently left for dead, at a garbage tip before dawn yesterday.

The police were notified of the man’s condition by a passer-by who noticed him, unconscious and bleeding profusely from the head, next to a collection of garbage cans on a dark stretch of Soi Khanom Jeen Factory in Srisoonthorn Village 2, Thalang.

The man suffered from a large open wound to the top of his skull and his face was badly swollen, possibly indicating a brain hemorrhage, one Kusoldharm Foundation rescue worker who arrived at the scene told the Phuket Gazette.

Kusoldharm Foundation workers placed the man on a stretcher and transported him to Thalang Hospital, where staff quickly prepared him for the better-equipped Vachira Phuket Hospital in Phuket Town.

Initial questioning of local residents failed to find anyone who witnessed the attack or knew the victim.

However, witnesses said four youths aboard two motorcycles were seen speeding out of the soi where the attack took place shortly before Mr Wichai was found unconscious.

Phuket Airport security on the agenda