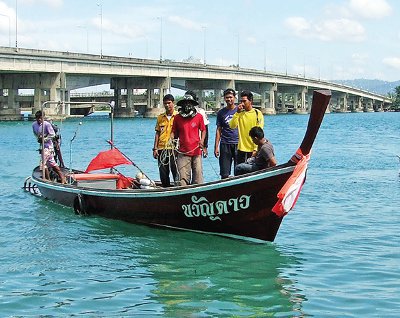 PHUKET: The families of the man and woman who have yet to resurface since disappearing from Thepkrasattri Bridge last week have called in soothsayers to help find the bodies.

However, despite at least five mystics proffering descriptions of where to look in the fast-flowing waters under the Phuket bridge, divers have yet to find the bodies of troubled young lovers Nattaphon Sitthiyanon, 25, and Chanokporn Aimauksorn, 27.

“I can see them. I see both of them now. They are both stuck under the bridge together,” one rang song (spirit medium) said while a Phuket Gazette reporter was present.

On hearing the seer’s description of where to look for the bodies, rescue volunteers, divers and local fisherman launched a search and scoured the area – to no avail.

As more seers arrived to help, the number of failed search attempts rose.

Perturbed by the visionaries’ repeated failure to locate the bodies, one Kusoldharm rescue volunteer told the Gazette, “Every time a rang song claimed he knew where the bodies were, we sent a dive team down. Each time it costs money, and we still haven’t found the bodies.”

To this, one seer later said he had finally discovered the reason – the spirit of the sea had already claimed them and was hiding them from the living.

Police are continuing their search, though hopes of finding the bodies have faded.