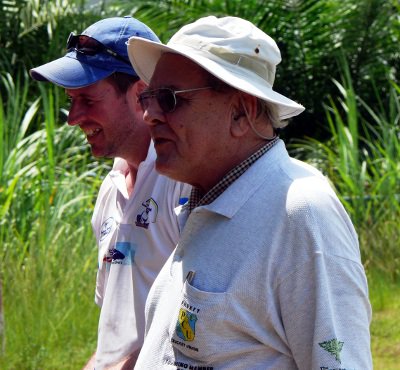 PHUKET: An anonymous benefactor has stepped up to donate one million baht to the development of the Alan Cooke Ground (ACG), Phuket’s first dedicated cricket ground and clubhouse.

Construction of the eagerly anticipated ACG was finally given a green light on May 31. The main financier of the project, Alan Cooke MBE, bought a parcel of land in Thalang specifically for a dedicated cricket facility to benefit the sport’s progression in Phuket.

An announcement sent to all Phuket Cricket Group (PCG) members this week stated: “The [ACG] will receive on request from an anonymous cricket enthusiast a donation of 500,000 baht to upgrade the clubhouse’s standard of finish. On completion of the clubhouse roof, a further donation of 500,000 baht will be made available to develop ground facilities.”

Speaking to the Phuket Gazette, Mr Cooke said, “While recently enjoying a drink one evening, I received a tap on my shoulder. Our now anonymous benefactor suggested this [ACG] was a substantial undertaking for one person and offered assistance.

“All PCG members are giving their time knowledge and expertise freely and at no cost, this becomes a significant multiplier in terms of the benefit that can be derived from this donation. [Architect] Anthony Van Blerk’s contribution has been outstanding to date, with more to come,” Mr Cooke added.

Mr Van Blerk has been instrumental in organizing the architectural plans being drawn up, he explained.

“We have big plans for the ACG. A number of people from the Phuket cricket community have and will be donating a lot of their time towards making the ground a success,” said Mr Van Blerk, PCG’s Honorary Secretary last year.

“In cases like this generous donation: for every baht received, two baht worth of value will be added to the facility,” Mr Van Blerk said.

ACG facilities will primarily focus on cricket, but other facets are being considered such as squash courts and a swimming pool, while other sports including rugby, field hockey and ultimate frisbee may also be played at the grounds.