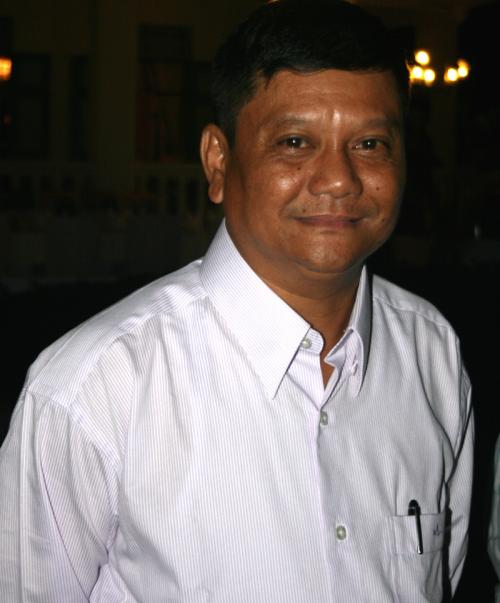 PHUKET: Under a tight program, Capt Aung Zaw Hlaing, Commander of Myanmar Number 1 Fleet, still made time for an exclusive interview with the Phuket Gazette during the navy’s historic first diplomatic visit to a foreign country (click here for story).

“We are very pleased to be here. It is the first time our ships have visited Thailand,” Capt Hlaing said. “The panoramic views are very beautiful and we’ve been met with smiling, friendly people. Third Naval Area Commander Vice Admiral Taratorn Kajitsuwan and other high-ranking officers, as well as the Thai crews have given us a very warm welcome.”

Capt Hlaing and other ranking members of the Myanmar Navy have already launched discussions during the friendly visit aimed at increasing co-operation between the two navies as they battle piracy and drug and human trafficking in their territorial waters.

“If we can create joint patrol operations, we can maintain peace and stability in the area,” he said. “Close, friendly relations and mutual understanding between our two navies is very important.”

Though Phuket was the target of the first diplomatic navy mission, Capt Hlaing assured the Gazette that the goal was to promote stronger relations with all countries in the region, pointing out that the Myanmar Navy would be visiting India next.

“Ships from a variety of friendly countries in the region have paid us diplomatic visits. The Royal Thai Navy’s ships have visited Myanmar three or four times in recent years, so we are now reciprocating, and visiting other navies with which we have good relations,” he explained.

One of the many duties of the 125-vessel navy is protecting the mostly untapped marine resources off the 2,835-kilometer coastline of Myanmar – the offshore oil, gas and mineral resources, as well as fisheries and pearl production areas.

“We cannot permit illegal activities on the sea,” Capt Hlaing said. “It is necessary for companies to obey rules and regulations.

“Those who join the navy to maintain law in our territorial waters are all volunteers, since our military is a patriotic armed service. They enter in accordance to their personal aspirations,” he said.

Despite the Thai and international media spotlight on the Rohingya’s flight from Myanmar, Capt Hlaing spoke only briefly on the topic.

“You call them Rohingya, we call them Bengali. We allow the government to handle the situation,” he explained when asked about the current navy policies in regard to the refugees.

Capt Hlaing thanked the Royal Thai Navy for their great show of hospitality.

“It has been a very good visit. Vice Admiral Tharathorn and other high-ranking officers have assisted us in every possible way, and shown us true Thai hospitality,” he added.

Putting it all on the line – Live Wire