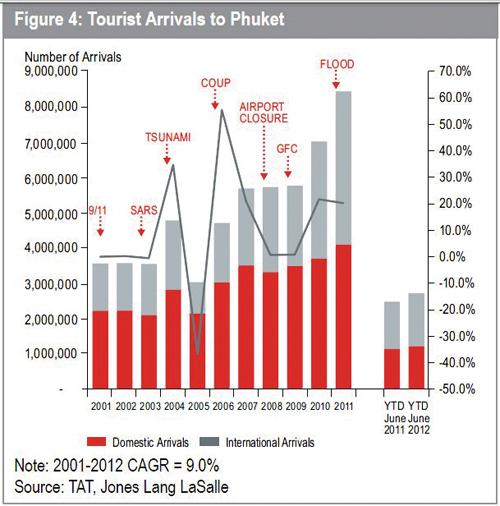 PHUKET: The island emerged last year as Thailand’s strongest hotel market, according to a recent report by Jones Lang LaSalle.

The report, entitled Spotlight on Thailand – Hotel Investment Market said that as of December 2012, year-to-date (YTD), Phuket had an occupancy rate of 72.4%.

Meanwhile, it said that the Average Daily Rate (ADR) was 3,902 baht, which resulted in Revenue per Available Room (RevPAR) 2,824 baht.

This was higher than other markets in Thailand, with the exception of Bangkok’s five-star hotel market.

The strong hotel performance was credited primarily to the continual growth of international visitors, which have increased steadily from 2.3 million in 2009 to 4.3mn in 2011.

As of June 2012, YTD, visitor arrivals recorded a year-on-year increase of 9.7% to 2.7mn. During the same period, domestic visitors registered a 6.6% year-on-year growth to 1.2 million.

China, Russia, Korea and Australia were the fastest growing source markets for Phuket.

Between 2009 and 2011, arrivals from China and Russia have showed an impressive CAGR (compound annual growth rate) of 119% and 109% respectively, while those from South Korea and Australia grew by 38% and 37%, respectively.

Sweden has remained as the only (Western) European country in the top five source markets following the global economic crisis.

The total number of domestic and international tourists accounted for approximately 6mn arrivals between 2007 and 2009, followed by a significant jump to 7mn in 2010 and almost 8.5mn in 2011.

The fast pace of growth has put the island’s infrastructure under pressure, especially the Phuket International Airport (HKT). Having exceeded its original handling capacity of 6.5 million passengers per year, HKT received an estimated 9.4mn travelers in 2012.

In early September 2012, the Airports Authority of Thailand announced the appointment of a main contractor to lead the 5.7 billion baht expansion of HKT.

The expanded airport will see the addition of an international passenger terminal, boosting its capacity to 12.5mn travelers a year.

An expanded airport is expected to attract major international carriers to fly direct to Phuket, including Emirates’ Dubai – Phuket route which commenced flights in December 2012, as well as direct flights from London scheduled to commence in late 2013.

Construction of the new terminal is estimated to be completed by 2015.

Despite the significant growth in hotel supply, with 2,756 additional rooms anticipated by 2015, the increase in visitor arrivals has provided demand and the outlook remains positive.

Given the current rate of growth, airport expansion plans and an increase in affluent Asian travelers with greater spending power, Phuket is poised to retain its position as one of Asia’s most popular tourist and investment destinations.

An Active Year
Overall, 2012 was an exceedingly strong year for hotel investments in Thailand.

Phuket remains the hotspot with four major transactions of over 1bn baht each, three of these being undertaken by Jones Lang LaSalle’s Hotel & Hospitality Group.

The Moevenpick Resort & Spa Karon Beach was sold early in the year on behalf of Kingdom Hotel Investments to Malaysia’s TA Global, for approximately 2.8bn baht or 8mn baht per key, yielding an initial yield of approximately 9%.

The 338-key property (excluding residences) is situated on an expansive 52 rai plot of land in front of Karon Beach and offered numerous expansion and redevelopment opportunities to the incoming investor.

The Evason Phuket Resort & Bon Island, situated on over 110 rai of freehold land in the south of the island, and featuring a private beach [front property] on Bon Island, traded in an approximately 1.4bn baht deal to an interest associated with LC Development out of Singapore.

The property was subsequently closed with the purchasers believed to be considering a major redevelopment of the resort and extensive land holdings.

Unlike the two deals described above, the sale of Laguna Beach Resort to Outrigger Hotels & Resorts did not involve a public company investor and, as such, much of the transaction information remains confidential.

The transaction involved the Laguna Beach Resort (acquired last year by RECAP) which was subsequently closed for a major renovation.

The resort is expected to be completed in the first quarter of 2013, and will open as the Outrigger Resort & Spa.

The final transaction recorded in Phuket involved the sale of the Bundarika Villas & Suites on Layan Beach to Minor Hotel Group.

The deal, which was worth US$95 million or close to 3bn baht, comprised of the existing 77 villas and suites on 23 rai of beach-front land, funds to refurbish the existing property and further expansion on a 32 rai plot of land also acquired as part of the transaction.

Phuket Business: AMCHAM to host US taxation seminar in Patong