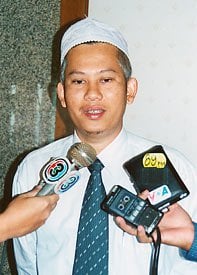 PHUKET TOWN: The leaders of the Muslim community in Phuket today criticized the terrorist attacks on the United States and voiced their hope for continued peace in the world. Speaking at an assembly of senior Muslim figures at the ST Hotel, Manot Phanchalard, secretary of the Islamic Committee of Phuket, said, “Muslims in Phuket do not agree with what happened in the USA because these acts killed many innocent people.” He added, “I want to make a plea to Muslims: whatever you may feel about these events, please keep your feelings to yourself. Don’t show them in public and don’t destroy the good atmosphere in Phuket.” K. Manot also made a plea to non-Muslims not to stereotype Muslims as extremists. “We pray that we will not have a situation where Muslims are stereotyped. Islam is a religion of peace. We have no plans for action in Phuket and we pray to Allah for peace in this world.” He criticized Prime Minister Thaksin Shinawatra for offering support to the USA. “Thailand is far away from what happened. We should not make hasty decisions, because if problems arise later from those decisions, it will be difficult to turn back. Thailand should not try to act like a hero.” Next Saturday, he said, the Islamic Committee of Phuket will send a representative to a meeting in Yala of Muslim leaders from around Thailand. The meeting will examine the issues arising from the events of September 11 and to come to a consensus on the attitude that Thailand’s Muslim community should adopt.