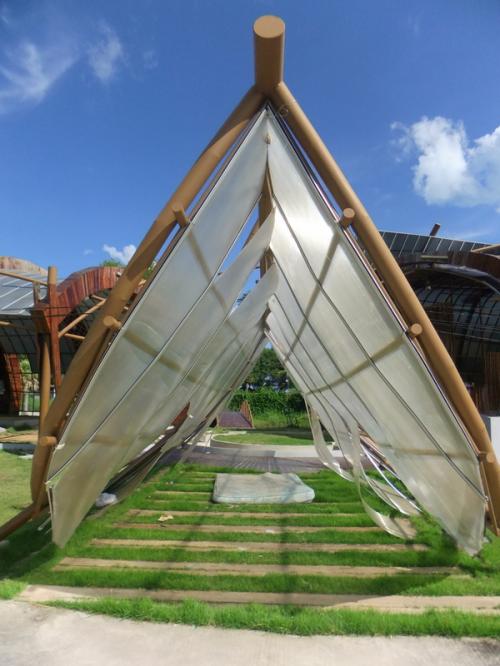 PHUKET: The long-awaited Sea Gypsy Cultural Center, slated to open at the end of 2012 at a budget that ballooned from 2 million to 5.4 million baht, has deteriorated into a derelict shell of a building that has become a shelter for the homeless.

The promised library, exhibition spaces and native handiwork demonstrations highlighting the millennia-old culture of the Urak Lawoi sea gypsies now living on Koh Sireh never arrived. Instead, there are mattresses for those still sleeping under the stars.

Located on a small nondescript soi at Laem Tukkae, out of sight from the beach where tourists board speedboats for day trips to the islands, the unoccupied multi-million baht center has fallen into disrepair: roof panels have fallen off, a mattress lies under a supporting structure and another floats in a pond.

A takraw court has been set up on the grass at the entrance.

“It was transferred to us before it was finished and we don’t have enough money to complete it,” he said.

“It needs to be landscaped. That will cost two to three million baht, and we don’t have the money.

“The Department of Public Works has agreed to finish the project. Right now, we are just looking after the structure. We have a security guard who keeps the place tidy,” he said.

There is one other major obstacle to opening the cultural center: the rate of development in the area.

In May 2012, the center was described by Mr Dachakanee as one attraction among many that would contribute to the development of Koh Sireh.

“Koh Sireh has been neglected for so long, but Mayor Phudit Raksaraj has a plan to bring this part of town back to life. He wants to develop Koh Sireh into an important tourist attraction,” he said at the time.

Now, however, it appears that the cultural center will not be leading the way toward development but instead will need to wait for other development in the area to rise before it can open.

“We are waiting for the renovation of the Baan Laem Tukkae area and will officially open the whole area at the same time to promote Koh Sireh as an important Phuket attraction,” Mr Dachakanee told the Phuket Gazette.

On the mayor’s list of developments as stated last year were an artificial beach, a musical fountain in the sea and a viewpoint on the hill behind Koh Sireh temple.

The proposal for the center – said to be the first of its kind in Asia – was first announced in 2009 as part of a plan to preserve and exhibit the life and culture of Urak Lawoi sea gypsies.

Two million baht was provided for the construction of the center by the Phuket Provincial Public Works Office, and the remaining 3.4 million baht came from a financial stimulus package launched under the government of Prime Minister Abhisit Vejjajiva.

One local resident who declined to be named expressed her disappointment.

“It was supposed to open last year but it seems like it will never be finished, it just stays there without any further construction.

“The officers said that will be exhibitions and tourist attractions in Koh Sireh, but that seems like an imagination project,” she said.

“You can see teenagers using the car park of the cultural center to play takraw in the evening.

“At the entrance of the building, you can see a mattress under the cover, it is turning into a shelter for the homeless already” she added.

“Is this how the Sea Gypsy Cultural Center should be?”