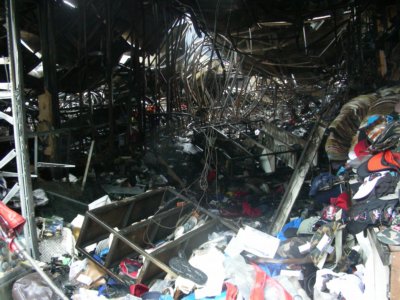 PATONG: A shophouse fire along the beach road in Patong gutted 10 small vendors’ shops before dawn on Monday. It was the third such blaze in the past 15 months. No injuries were reported.

Police Station Superintendent Pol Col Grissak Songmoonnark told the Gazette that the fire broke out at about 5 am inside a shophouse located between the Holiday Inn Resort and Soi Kebsup. Firefighters from both Patong and Karon municipalities took about 90 minutes to extinguish the blaze.

As with previous fires along the beach road, firefighters’ efforts were hampered by dangling electric wires that limited their access to the flames and caused a risk of electrocution until the power could be shut off.

It is still to early to assess the total damage, said Col Grissak.

Among the tourist-oriented goods destroyed in the conflagration were clothes, watches, eyeglasses and other souvenirs, he added.

Noting the similarity between this blaze and two fires that broke out in June and November last year, Col Grissak said police were still collecting evidence to determine the cause and whether the fires might somehow be related.

While arson is yet to be ruled out, Col Grissak said it was more likely that low-quality electrical work was the cause of the fire. When setting up new businesses, many people in Patong tap into old transformers and pay little regard to safety issues, he said.

The fact that nobody was present when the fire started might make it hard to pin down the exact cause, he added.

Col Grissak said he would also investigate the possibility of insurance fraud or other motives.

Police are still awaiting lists of assessed damages from the shop-owners, who were not identified.

When asked if there had been any progress in the cases of the two blazes in 2006, Col Grissak said investigators were still awaiting results from a police forensics lab.

On June 14, 2006, four shophouses on the corner of Thaweewong Rd and Soi Phermpong Phattana 2, just south of Banthai Beach Resort, were damaged by a fire that broke out about 2 am and took two hours to extinguish.

Five months later, at about 4 am on November 16, another fire broke out in a row of shops, also near the Holiday Inn Resort. The two-hour blaze destroyed eight vendors’ stalls and caused an estimated 10-million baht in damages before firefighters could put it out.

In all three cases, live electrical wires hanging from power poles between the shops and the road caused problems for firefighters. The presence of so many dangling cables along the beach road has long been a source of complaint from tourists and local shop-owners.

Patong Municipality had requested that the cables be installed underground as part of the Tourism Authority of Thailand’s post-tsunami redevelopment plan for the area, but the request was denied.