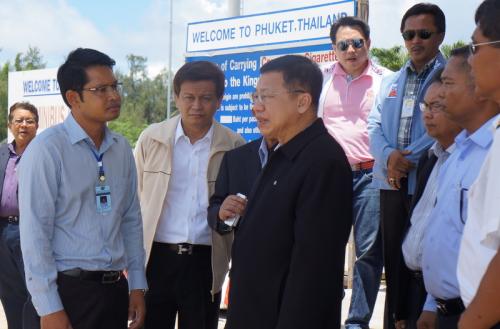 PHUKET: The Minister of Tourism and Sports, in Phuket to inspect the Deep Sea Port today, has pledged to push forward the 100-million-baht plan to expand Phuket’s key port facility.

“I will raise the issue with the Minister of Transportation next week,” Somsak Pureesrisak told reporters today.

The plans to expand the port so it can berth two large cruise liners simultaneously, have been mired for two years for failing to pass the required environmental impact assessment (EIA) evaluation.

Both urged Minister Somsak to push forward the project and explained how much Phuket needs the port to be developed.

“We’ve been working on passing the EIA for two years, but every time we submit the redrafted plans we are asked to fix another problem,” Mr Sophon said.

“Please help us push forward the plan,” he urged.

Mr Sophon explained that the project, which was reported to cost more than 100 million baht, includes extending the dock by 60 meters so two large ships can berth at the same time, as well as building new facilities to receive tourists disembarking and expanding the parking lots at the site.

Mr Sophon said it would take no more than 13 months to complete the project once it passed its EIA requirements.

He explained that the Deep Sea Port was originally designed to serve cargo ships only.

“The dock is 360 meters long, which can accommodate only two ships, each not longer than 173 meters long, at the same time.

“The problem is that bigger ships are now coming to the port, especially cruise liners. So far the biggest one has been 270 meters long, which does not leave enough room for another ship,” Mr Sophon explained.

“Cruise liners were given priority to dock at the port, even if it meant forcing a cargo ship that is halfway through loading or unloading to move offshore,” he said.

Mr Phuripat explained, “We have been working for over two years on having the project pass its EIA, but it does not seem to be working. It has caused a lot of problems.

“The port is currently not able to support Phuket tourism to the best of its ability. The facility needs to be developed,” he repeated.

Minister Somsak agreed with the plan presented to him.

“We have to identify which departments we must discuss this with so we can push forward the plan. On May 10, I have a meeting with the Minister of Transportation, and this plan will be raised,” Minister Somsak vowed.

Mr Somsak is in Phuket as part of his “fact-finding” tour of Phuket, Phang Nga and Krabi provinces to identify ways the government can help support tourism development along the Andaman seaboard.

Phuket Governor Maitri Inthusut will attend to welcome the minister.