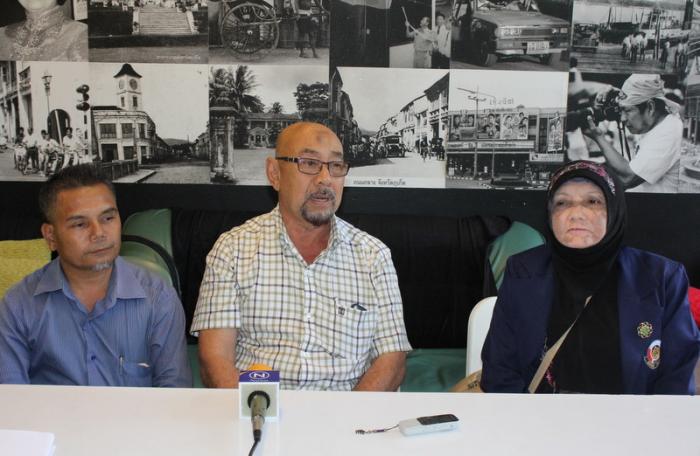 PHUKET: Three people who allegedly owned land documents for chunks of Naka Noi Island off Phuket’s east coast have challenged the family of Thai actor Puri Hiranpruk with the suggestion that all parties involved in a recent land dispute should donate their property to the public as a conservation area for local wildlife.

Jeya Tonkhlang, Dolmanap Tonkhlang and Jessada Thorthip spoke at a press conference yesterday to explain the tangled history of the ownership of the lush tropical island.

According to Ms Jeya, her grandfather Meaun Wangdee owned the entire 150 rai of land, which was then passed down to her father Ma-air Wangdee. Mr Ma-air then split about 60 rai of land from the family property. This 60 rai was sold to Luang Kajorn Lohawe, whose daughter sold the property to the family of famous Thai actor Puri, who also has a concession that secures the first 200 meters of a section of seabed for a pearl farm.

The remaining plots were then allegedly divided up between Ms Jeya, Mr Dolmanap and Mr Jessada.

“My father didn’t inform the Land Department that we owned the property, so we never had land title deeds for it,” said Ms Jeya, who claims to now possess a NorSor 3 land document for a section of the property, but failed to present it during the press conference.

In fact, none of the three people who met with the press presented the necessary documents to back their claims.

“We owned the land without any documentation until about 20 years ago, when we got the SorKor 1,” said Mr Jessada – he didn’t explain how he was able to obtain the SorKor 1, stating only that his father had taken care of the matter.

The row started after Mr Jessada upgraded the land usage document to a NorSor3Kor, which allegedly saw the land specified in the document swell from about seven rai to 17 rai, explained Lt Col Prawut Wongseenin, director of the Department of Special Investigation’s Bureau of Consumer Protection and Environmental Crime, during an investigation into the plot in December last year (story here). The document is now allegedly for a 24-rai plot of land.

“The change of the plot of land from seven rai to 24 rai might have been caused by measurement issues during the upgrading of the land documents. However, I can confirm that the land I owned was 24 rai,” said Mr Jessada today.

The same day that the land document was upgraded, July 30, 2014, it was sold to Six Mountain Co Ltd for more than 42 million baht.

Mr Puri filed the complaint following the sale of the property.

Earlier this month, Mr Puri made a post on Facebook about gunmen and a backhoe allegedly clearing the land, despite the ongoing DSI investigations. An inspection led by Phuket Vice Governor Chokdee Amornwat found no evidence to back the claim (story here).

A counter lawsuit was filed against Mr Puri. The owner of Six Mountains, Chanwit Kitlertsiriwattan, claimed that allegations made by Mr Puri could cause serious damage to his, as well as the company’s, reputation.

“The Facebook post about gunmen and a backhoe clearing the land can negatively impact our company, especially as neither of the claims is true,” Mr Chanwit said.

The Computer Crimes Act charge was filed against Mr Puri at Thalang Police Station on April 8.

“Mr Puri says that he asked officials to investigate the land documents on Naka Noi because he is worried about the hornbills native to the island, as well as other wildlife in the area,” said Mr Jessada. “If his family is truly worried about the well-being of these animals, they should donate their land to the public. If they do so, we will follow suit.”

Despite his pledge, Mr Jesseda, who sold the property to Six Mountains Co Ltd, is not able to legally guarantee the donation of the plot of land he sold.

No representative of Six Mountains Co Ltd spoke at the conference.