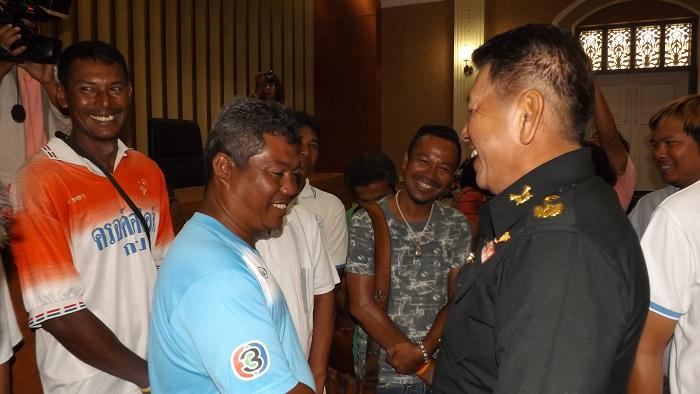 The general made the remarks after meeting with sea gypsy community leaders in an effort to mediate between the two sides and avoid any further conflicts erupting.

The land dispute between members of the sea gypsy community and Baron Trade Co has escalated to violence in the past, as both groups claimed ownership of the beachfront land in Rawai (story here).

Members of the sea gypsy community and human rights activists met with commanders from the 41st Military Circle in Phuket Provincial Hall yesterday, after receiving a summons on April 20 (story here).

“First of all, I want the public to understand that we are not threatening the sea gypsies at all,” Gen Teenachat told the Gazette. “We just wanted to talk to them and understand their side of the issue – what they need and their way of life.”

“The sea gypsies have cooperated with us and we’ve heard their stories. Next, we’ll need details from Baron as well, which we expect to receive soon,” Gen Teenachat said.

“First, we want Baron to stop developing the land in question. The provincial government has already spoken with them, and I think there is a high likelihood they will cooperate with us. That is the best way to stop this conflict at the present time,” said the general.

Rawai sea gypsy representative Nirund Yangpan, 40, echoed that cooperation was at the forefront of the talks.

“The military listened to our stories and our requests,” Mr Nirund said. “They’ve asked us not to fight over the development. We just want to have what we used to have. With the help of human rights activists, I believe that we will find a solution.”

Phuket Governor Chamroen Tipayapongtada said his office is waiting to hear back from Bangkok about a proposal to buy out some of the area’s title deed holders (story here).

“We estimate the land to be worth about 253 million baht,” Governor Chamroen said. “Another 60mn baht would be needed to develop the area and build about 300 houses for the sea gypsies. We appreciate the involvement of the military to help prevent conflict between both sides during this negotiation period.”