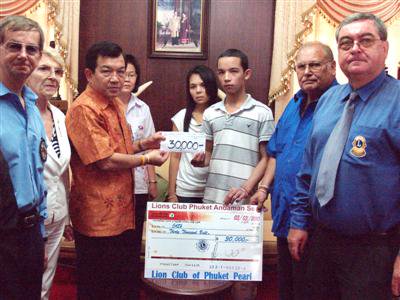 PHUKET: Several more organizations have donated additional funds to help the 16-year-old leukemia patient in Phuket who wrote a letter to HM The King asking for help.

All of the money would be kept in Jenarong’s bank account and used solely to pay for his treatment costs, Mrs Wasuthida said.

Jenarong had already received 800,000 baht in donations organized through the Thai Red Cross.

They expect the tests to be finished by early April, around the time of Jenarong’s next appointment at PSU. This is also the time when his sister Natthakarn will be on her school break.

Jenarong, unable to attend classes at Dowroong Wittaya School for over a year, is keen to resume his studies.

“I’m going to apply for non-formal education because you don’t need to attend classes, you just study at home,” he said.

“I’m also going to try the entrance examination for Phuket Wittayalai School. I just want to know whether I can pass it.”

Phuket Wittayalai School is one of the most difficult schools to gain entrance to in Phuket.