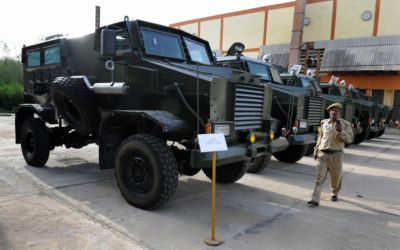 PHUKET: Members of Thailand’s Council of Ministers have begun swapping their official sedans for bullet-proof vehicles following a warning by Prime Minister Abhisit Vejjajiva. According to ThaiVisa.com, this was discussed at a meeting on security issues in the lead-up to the ‘million-person’  red-shirt rally planned by the United Front for Democracy against Dictatorship (UDD) for March 14. There have been rumors of anti-government protesters wanting to take senior military officers hostage. In response, additional riot security forces and military personnel have been assigned to protect Government House.

Asiatraveltips.com
Laguna Phuket has unveiled plans for a new venue capable of hosting a wide variety of meetings, incentive programs, conferences, gala dinners and, prospectively, concerts and exhibitions – all in a spectacular tropical waterside setting.

According to , ‘Latitude’, a 1,000-square meter marquee-style structure, will be an all-weather, fully air-conditioned stand-alone facility capable of accommodating up to 1,000 guests. The structure will have lined side walls that can be opened or removed for an open-air ambience, or closed and sealed with blackout capability for daytime conferences.

The project is scheduled for completion in four to five months.

Following a recent Indian wedding at Laguna Phuket, at which loud music was blared across the golf course into private villas until 5am, many residents of the area have expressed concern about growing noise pollution within the five-star complex.

Tired of the heat in Phuket? Prepare for more

Tan Network
The Meteorological Department has reported that temperatures in Thailand, particularly the South, including Phuket, will reach 43 degrees Celsius toward the end of March and continuing on into April. March 7-9 will also see a tropical storm hit the country.

Bangkok Post
While Phuket continues to attract large numbers of resident retirees from overseas, Thailand is expected to encounter a labor shortage over the next five years as its internal demographics shift rapidly to an aging society. The government’s planning agency, the National Economic and Social Development Board (NESDB) warns that the country is also at risk of a drain of highly skilled workers, especially when they are allowed to freely move around the Association of Southeast Asian Nations (Asean) over the next four years. According to the NESDB report, workers aged 40-59 now account for 41% of the total workforce of 38.32 million people, and workers aged 25-39 account for 37.8%.