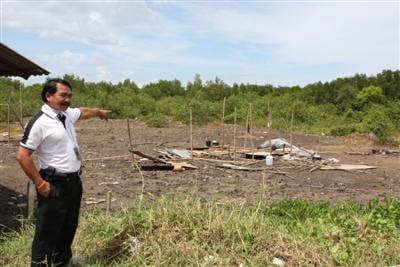 RASSADA, PHUKET: In the latest assault on Phuket’s natural environment, more than 10 rai of mangrove forest has been felled by encroachers.

The encroachment was reported to the Department of Marine and Coastal Resources (DMRC) Phuket office on Thursday afternoon.

Led by office chief Surachat Chararat, DMRC officers visited the site, located near the confluence of the Tha Chine and Chi Lao canals in Rassada Village 3.

There they found the knocked down remains of a small shack that had been built at the site and more than 10 rai of felled mangrove forest surrounding it.

Those responsible for the destruction were nowhere to be found, but a local resident told the DMRC officers that they were from the area.

The local community is divided on the issue of conserving what is left of the once-extensive mangroves that covered the low-lying area between Koh Sireh and the mainland, the villager told officials.

Mr Surachat said the encroachers are members of the ’30 Communities Network’, landless poor who in April this year protested to incoming governor Wichai Phraisa-ngop for access to running water and electricity for their communities.

Of the 30 communities, 13 have been established on what was once mangrove forest – including most of Phuket’s sea gypsy communities.

“They have already been provided with state land to live on. If we catch them encroaching again they will be arrested,” Mr Surachat said.