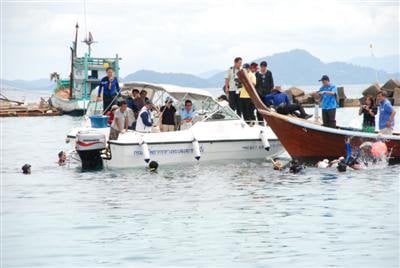 PHUKET CITY: In one of the many ceremonies that took place to mark the birthday of HM Queen Sirikit last week, 39 sharks and more than 10,000 other fish and marine animals were released into the sea off Phuket on Friday morning.

The release was organized by the Department of Marine and Coastal Resources through its Phuket Marine Biological Center (PMBC) and Phuket Aquarium.

Released into the sea off Mai Thon Island were 39 Indonesian bamboo sharks and 199 clown fish.

Meanwhile, students from nearby schools released 99,999 tiny prawns into the waters off Laem Panwa, where the Phuket Aquarium is located.

In addition to paying respect to Queen Sirikit, the event was also aimed at raising public awareness about the dwindling marine animal populations.

Raised in captivity in tanks at the PMBC, the bamboo sharks ranged in age from three months to two years at the time of their release.

The clown fish, popularized by the 2003 animated film Finding Nemo, were about three months old.

Unfortunately, the popularity of clown fish among aquarium owners following the success of the Pixar Oscar winner has put pressure on natural populations.

The Indonesian bamboo shark, which is completely harmless to humans, is also on the brink of extinction in local waters.

The PMBC plans to monitor the the bamboo shark population in the area around the point of release to see if they can survive there.