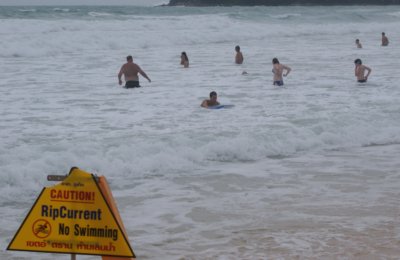 KARON, PHUKET: In the wake of the drowning of a Russian man at Karon Beach in Phuket, a local leader has warned that “more will die in the days to come.”

At least 10 people have drowned off Karon Beach so far in this year’s monsoon season, he said.

This morning, Russian tourist Alexander Lukin’s decomposing body washed up on the popular beach on the west coast of Phuket. The 32-year-old Russian disappeared in the surf on Sunday, swallowed up by two-meter-high waves before friends and beach guards could reach him.

In pouring rain, officials searched for Mr Lukin in a borrowed speed boat, but their efforts were in vain.

Beach guards had warned Mr Lukin and his friends not to swim in the sea, but they were ignored, Mr Winai said.

As is the case throughout the monsoon season, red flags warning people not to swim were on display.

Karon Beach was recently named the world’s fourth best for families by the Lonely Planet guide.

But for more on the safety of the beach, see this week’s Phuket Gazette, on newsstands around the island from Saturday.