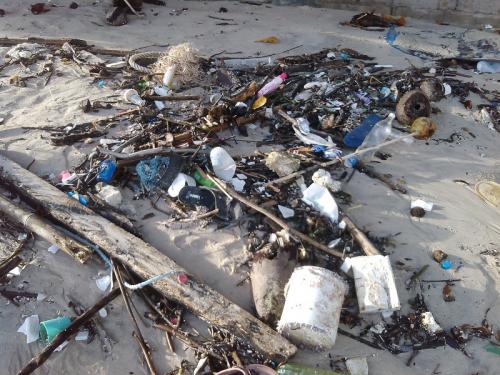 PHUKET: Broken glass, plastic and wood with protruding nails washing ashore on Patong Beach have alarmed Phuket tourists, but local authorities say they our powerless to prevent the dangerous flotsam.

Though officers from Patong Municipality’s Public Health Office collect trash strewn along the beach every morning, they are finding it difficult to keep the sand clear of debris.

“It’s the same problem we get every year in the [southwest] monsoon season. Garbage gets washed ashore every morning,” one of the health officials told the Phuket Gazette.

“At Patong, the seabed under the shallow water is shaped like a trough so garbage gets trapped,” he explained.

Lack of manpower was cited as a contributing factor to trash not being cleared from Phuket’s most-popular tourist beach.

“We don’t have a lot of staff to take care of this problem and the beach is about four kilometers long – so it takes time to complete the job.

“Sometimes we can’t finish in the morning so the garbage is still on the beach in the afternoon,” the officer said.

“We are doing our best to keep the beach as clean as possible,” he added.