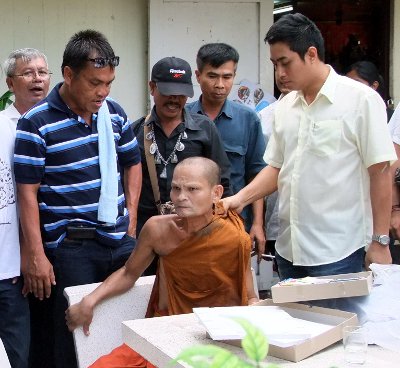 PHUKET: A monk has been defrocked in Phuket and is being held by police after a violent and possibly drug-induced incident at a cremation ceremony this morning.

At about 10am Anusit Kulphonmuang, 52, from Udon Thani, reportedly leapt from a wall at Wat Saensuk temple in Phuket Town and seized a 12-year-old girl by her neck.

Mr Anusit was reportedly seen drunk near the temple earlier this morning.

“He jumped from the wall and came directly at my daughter,” said Thawatchai Pongpetchwiset.

“It looked like he was going to strangle her, but she managed to run away,” he said.

Mr Thawatchai and his cousin, Teerapat Chidchiew, moved to protect the young girl, but the Mr Anusit allegedly fought back and kicked Mr Teerapat in the shoulder.

Although Mr Thawatchai said there were other monks in the area when the incident occurred, Mr Anusit was the only person apprehended until the Phuket City Police arrived.

Police held Mr Anusit at the temple until he calmed down.

The abbot of Wat Saensuk defrocked Mr Anusit before the police took him to the Phuket City Police Station.

“Anusit isn’t from this temple, he came from Northeastern Thailand more than three years ago,” said one of the monks at the temple who wished to remain anonymous.

“This man is always drunk, and he probably uses drugs,” he added.

Witnesses who also asked to remain anonymous have confirmed to the Phuket Gazette that they could smell alcohol on Mr Anusit’s breath.