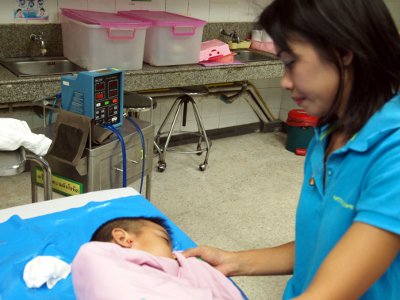 PHUKET: Police this afternoon arrested a man after he randomly stabbed a 7-year-old boy in the head with a screwdriver while the child was playing with friends in Phuket Town

Still in tears and shocked by the attack, the boy’s mother, Chareerat Naksri, told the Phuket Gazette that the stab wound narrowly missed the right ear of her son, Krittamet “Best” Kingsaiyut.

“I was not with him when it happened. I was at a parent-teacher meeting at Bang Niew School. I left him at my friend’s telephone shop.

“My friend said Best was playing with three friends when a man came from nowhere and started trying to stab people on the street.

“But the people pushed the man away, and then he saw the children. He stabbed my boy, then ran away,” Ms Chareerat said

Phuket City Police received a report of the incident at about 1:30pm.

“Initial reports from witnesses said the suspect was a man about 40 to 50 years old, wearing denim shorts and a white shirt. We soon found a man matching that description. He had a knife and a screwdriver in one of his hands,” Lt Col Akkaradet said.

“But when he saw us, he suddenly charged us – chasing the police officers with the weapons he had,” he added.

Officers soon overpowered the man and placed him under arrest.

“We took him to the police station for questioning, but he has not given any statement. So we have yet to learn who he is and where he is from,” Lt Col Akkadet said

“At this point we believe the man is deranged. Some residents said they saw him lying on the ground in front of shops at the Bang Niew intersection. He is being held at the station because we are concerned he may attack somebody else,” he added.

Ms Chareerat said she had yet to confirm with doctors the extent of young Best’s injuries.

“I do not know how deep the wound is. I asked him how he felt and he said it hurt to swallow. I will have the doctors check him thoroughly again,” she said.