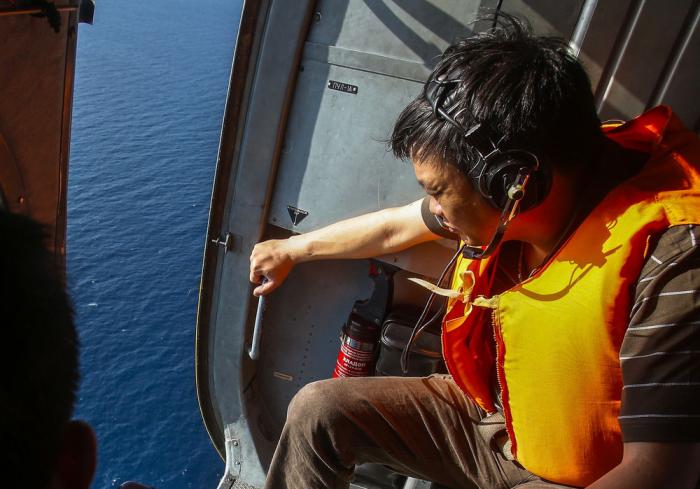 PHUKET: Malaysia’s military has traced what could have been the jetliner missing for almost five days to an area south of Phuket, hundreds of miles to the west of its last known position, the country’s air force chief said yesterday.

His statement followed a series of conflicting accounts of the flight path of the Boeing 777-200ER with 239 people on board, which left authorities uncertain even which ocean to search in for Malaysia Airlines Flight MH370.

The last definitive sighting of the aircraft on civilian radar screens came shortly before 1:30am on Saturday, less than an hour after taking off from Kuala Lumpur, as it flew northeast across the mouth of the Gulf of Thailand bound for Beijing.

What happened next remains one of the most baffling mysteries in modern aviation history and the differing accounts put out by various Malaysian officials have drawn criticism of their handling of the crisis.

In the latest potential lead, a Chinese government agency website yesterday said a Chinese satellite had photographed three “suspicious floating objects” on Sunday in waters northeast of Kuala Lumpur and south of Vietnam.

It said the images were taken over the “suspected accident area at sea” that was not far from where the plane made its last known communication with air traffic control.

The website of the State Administration for Science, Technology and Industry for National Defence said the objects measured about 22 by 24 meters, 14m by 19m and 13m by 18m. It was unclear if that location had been searched.

There was no immediate explanation why the Chinese agency waited for four days to reveal the images.

One senior US defense official said US satellites had not located any sign of a crash.

Earlier yesterday, Lt Gen Rodzali Daud, the Malaysian air force chief, told a news conference that an aircraft was plotted on military radar at 2:15am, 320km northwest of Penang, off Malaysia’s west coast.

But there has been no confirmation that the unidentified plane was Flight MH370, Gen Rodzali said, and Malaysia was sharing the data with international civilian and military authorities, including those from the United States.

“We are corroborating this,” he added. “We are still working with the experts.”

According to the data cited by Gen Rodzali, if the radar had spotted the missing plane, the aircraft would have flown for 45 minutes and dropped only about 1,500m (5,000 feet) in altitude since its sighting on civilian radar in the Gulf of Thailand.

There was no word on which direction it was then headed, but if this sighting was correct, the plane would have turned sharply west from its original course, travelling hundreds of miles over the Malay Peninsula from the Gulf of Thailand to the Andaman Sea.

This would put it about 320km northwest of Penang, in the northern part of the Strait of Malacca, roughly south of Phuket and east of the tip of Indonesia’s Aceh province and India’s Nicobar island chain.

Indonesia and Thailand have said their militaries detected no sign of any unusual aircraft in their airspace. Malaysia has asked India for help in tracing the aircraft and New Delhi’s coast guard planes have joined the search.

The US National Transportation Safety Board said in a statement that its experts in air traffic control and radar who travelled to Kuala Lumpur over the weekend were giving the Malaysians technical help in the search.

A US official in Washington said the experts were shown two sets of radar records, military and civilian, and they both appeared to show the plane turning to the west and across the Malay peninsula.

But the official stressed the records were raw data returns that were not definitive.

Authorities were continuing to search on both sides of the Malay peninsula in a total of over 27,000 square nautical miles (93,000 sq km), an area the size of Hungary or Indiana.

There has been no sighting of any debris, prolonging the agonizing wait for hundreds of relatives of those on board.

“My heart reaches out to the families of the passengers and crew,” the minister said “And I give you my assurance we will not reduce the tempo and that we will not spare any effort to find the missing plane.”

Malaysia has been criticized for giving conflicting and confusing information on the last known location of aircraft.

“The Malaysians deserve to be criticized – their handling of this has been atrocious,” said Ernest Bower, a Southeast Asia specialist at the Center for Strategic and International Studies in Washington.

“They don’t know where the plane is; they have briefed key partners and changed the story several times,” he said.

The air force chief yesterday denied saying on Tuesday that military radar had tracked MH370 flying over the Strait of Malacca, saying that the radar sighting was still unconfirmed (story here).

Amid the confusion, Vietnam briefly scaled down search operations in waters off its southern coast, saying it was receiving poor information from Malaysia. Hanoi later said the search was back on in full force and was even extending on to land.

“As long as the plane is not found, we would continue doing our mission,” Vo Van Tuan, spokesman for Vietnam Search and Rescue Committee, told reporters in Hanoi.

China also said its air force would sweep areas in the sea, clarifying however that no searches over land were planned.

Authorities have not ruled out any possible cause for the plan’s disappearance. Malaysian police have said they were investigating whether any passengers or crew on the plane had personal or psychological problems that might shed light on the mystery, along with the possibility of a hijacking, sabotage or mechanical failure.

The Boeing 777 has one of the best safety records of any commercial aircraft in service. Its only previous fatal crash came on July 6 last year when Asiana Airlines Flight 214 struck a seawall with its undercarriage on landing in San Francisco, killing three people.

Boeing Co, the U.S. aircraft company that makes the 777, has declined to comment beyond a brief statement saying it was monitoring the situation.