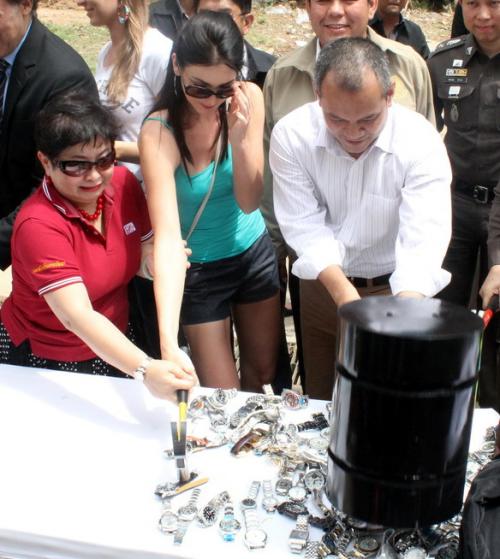 PHUKET: Miss Universe 2005 Natalie Glebova joined officials as they destroyed pirated goods worth about 216 million baht in a ceremony in Phuket today, which was held to demonstrate Thailand’s dedication to protecting intellectual property rights.

“We are here to increase the awareness of consumers about counterfeit designer goods and to encourage them to say ‘no’ to pirated products. By completely destroying these products we can increase the confidence of brand owners that these illegal copies will not end up back on the market,” said Deputy Commerce Minister Nattawut Saikua, who chaired the ceremony.

Mr Nattawut, Phuket Governor Maitri Inthusut and Miss Glebova all grabbed hammers for the event and took part in smashing some of the 94,210 counterfeit items seized by Region 8 and Region 9 Police, as well as Region 4 customs.

Fake copies of designer brand-name clothes, sunglasses, purses, shoes and watches were among the many items destroyed during the ceremony.

“Because of the importance of protecting producers’ intellectual property rights, we have set up the National Intellectual Property Rights Protection Center,” Mr Nattawut explained.

The new center, dedicated to improving communication between different agencies in charge of protecting intellectual property rights, was established at the Ministry of Commerce in Bangkok last month.

“Within the center, different organizations are assigned separate responsibilities geared toward putting an end to intellectual property rights infringement. The Department of Special Investigations is responsible for investigation and suppression; the Office of the Attorney General will continue to press charges and apply the laws of Thailand in court; and the Department of Intellectual Property will focus on public relations in order to increase public awareness,” Mr Nattawut said.

“We have to gain the trust of foreign investors who want to come and establish business in Thailand,” he added.

Despite regularly destroying hundreds of millions of baht of pirated goods a year, Thailand struggles to shake the image of being a hub for counterfeit goods.

Most recently the Kingdom found itself in the international spotlight after Lady Gaga landed in Bangkok for her “Born this Way Ball” performance in May last year.

Shortly after her arrival, the pop star tweeted to over 24 million Twitter followers, “I just landed in Bangkok baby! Ready for 50,000 screaming Thai monsters. I wanna get lost in a lady market and buy a fake Rolex.”

In response, the Commerce Ministry’s Intellectual Property Department officially expressed its disappointment to the US Embassy, reported The Nation.