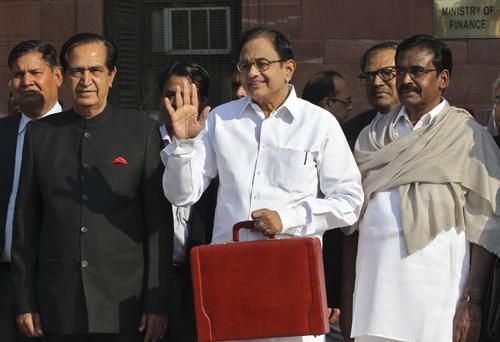 PHUKET: India unveiled higher-than-expected spending for fiscal 2013/14 today, aiming to fund it with higher revenues – including new taxes on the rich and large companies – in a budget aimed at reviving growth amid the country’s worst slowdown in a decade.

The budget caps an intensive campaign by Finance Minister P. Chidambaram since he was appointed last August to turn around the fortunes of Asia’s third-largest economy after years of policy drift and global economic turmoil.

“Fiscal consolidation cannot be effective only by cutting expenditure,” Chidambaram said in his speech, a balancing act to stave off a credit rating downgrade and meet demands for populist spending heading into an election year.

Total budget expenditure will rise by an unexpectedly high 16 percent in the fiscal year that begins on April 1 to 16.65 trillion rupees (9.2 trillion baht; 1.81 rupee = 1 baht), even as the fiscal deficit for the current year will fall to 5.2 percent of gross domestic product, besting a revised target of 5.3 percent.

Next year’s deficit will be 4.8 percent of GDP, he said, in line with expectations.

Net market borrowing of 4.84 trillion rupees for the new fiscal year met investor hopes that the figure would not top 5 trillion rupees, but the gross figure exceeded expectations.

“The high gross borrowing and the higher spending is going to be inflationary and RBI would rather think of slowing the pace of monetary easing rather than increasing it,” said Rupa Rege Nitsure, chief economist at Bank of Baroda.

Fending off ‘junk’
India’s fiscal and current account deficits have alarmed investors and ratings agencies, triggering warnings that the country’s sovereign bonds could be downgraded to ‘junk’ status if urgent steps are not taken to rein in spending.

Chidambaram has staked his reputation on hitting a fiscal deficit target of 5.3 percent of GDP this year and 4.8 percent in 2013/14. A no-nonsense, Harvard-educated, lawyer who commands both respect and fear in government, he squelched opposition from cabinet colleagues worried that spending cuts could ignite a backlash among voters.

Chidambaram has focused on winning back foreign investors unnerved by proposals of his predecessor, Pranab Mukherjee, to tax merger deals retrospectively and clamp down on tax evasion. Since September, he has implemented a spate of investor-friendly reforms, including allowing entry of foreign supermarkets.

Dozens of corporate executives, watching a telecast at an industry event, exchanged nervous smiles as Chidambaram introduced the surcharge on the rich.

“In the larger scheme of things, I guess that is one way of reducing his deficit. Am I going to lose sleep over it? No,” Ganesh Natarajan, CEO of IT outsourcer Zensar Technologies, told Reuters by phone.

A flagging economy left Chidambaram with little room for big-bang populist measures without raising revenue, with economic growth for the current fiscal year on track to hit just 5 percent, nearly half of what it was in 2007/08.

“This country must not lose any time – India must get its act together to accelerate the tempo of growth,” Prime Minister Manmohan Singh said in a TV interview after the budget speech.

The budget also reflects the realities of a country of 1.2 billion people, many of them poor.

“On the one side is the economic policy, on the other side is economic welfare. We are a developing country. The link between policy and welfare can be expressed in a few words: Opportunities, education, skills, jobs and income,” Chidambaram said.