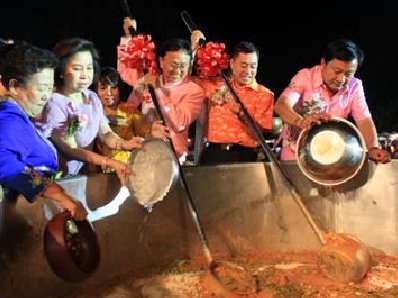 The festival, now in its second day, is being held at Saphan Hin park all weekend.

Entertainment at this year’s event includes a fashion show, jazz concert, performances by local school students, cooking and food exhibits, a handicraft exhibition and much more.

The highlight of tonight’s show will be the Miss Phuket pageant, with the each round interspersed by a variety of other stage performances.

Tomorrow night will feature a “Mother and Child” pageant.

Attendees will have a chance to sample what organizers say will be the world’s largest batch of Phuket curry sauce known as ajaap.

The event, from 4pm to 11pm daily, ends on Monday.

Beer and other alcohol products are not sold on the festival grounds, though vendors nearby are happy to oblige.