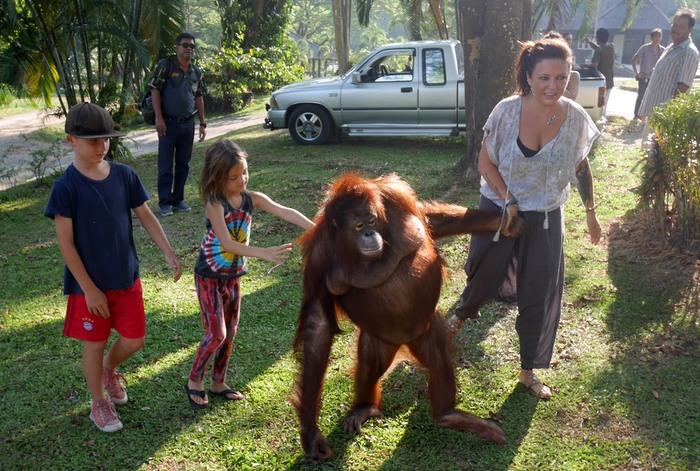 The 13-year-old orangutan disappeared from the Phuket Zoo ahead of a raid on the facility in February (story here).

Khao Phra Thaeo Non Hunting Zone officers then discovered her trapped in a locked cage, after she was allegedly released into the jungle (story here).

Milo was immediately transferred to the Phang Nga Wildlife Nursery Station, where she was receiving medical care while waiting for approval from the Department of National Parks (DNP) director to be moved to the Khao Prathap Chang Wildlife Sanctuary in Ratcha Buri, which houses a number of orangutans.

She was expected to be moved there later this month, until her health deteriorated suddenly.

In a Facebook post, Vicki Kiely, the local animal-rights activist who helped spearhead the push to free Milo from the Phuket Zoo, said she died somewhere between 8pm and 9pm last night.

“I know she was suffering greatly, and obviously gave up her long battle with her stroke last night,” Ms Kiely’s post reads. “I did all that I could for her. I loved her more than life. I put so much on the line to get her her freedom, and to show her love and compassion.

“She was my friend and brought a great joy to both my life and my childrens’, even in her dark days as prisoner in the Zoo… we struck a bond that I will never forget, and her spirit and personality will be with me forever.

“I wish that she could have fought more, but I think the illness was too severe for her to recover.”

Milo’s case has brought exotic animal smuggling and exploitation in Thailand to the limelight as conservationists such as Edwin Wiek, founder of Wildlife Friends Foundation of Thailand (WFFT), battle to free these animals.

In February, more than 12,000 people signed a petition organized by Change.org, calling for ‘Help for Milo’ (story here).