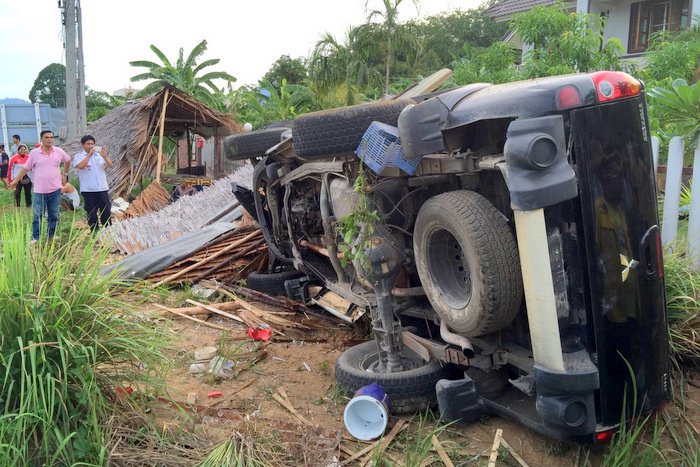 PHUKET: Six Myanmar workers were injured, one seriously, when the pick-up truck they were riding in the back of flipped on a curve at Cape Yamu, on Phuket’s east coast, yesterday.

“One of the six was seriously injured, and could not talk or move,” said Lt Col Sanit Nukong of the Thalang Police.

The pick-up truck was heading from the Heroines’ Monument to Pa Khlok when the driver failed to negotiate a curve at Yamu village at about 5pm.

The pick-up flipped onto its side and demolished a roadside food stall before coming to rest in front of a house.

“There were 10 Myanmar workers in the vehicle,” Col Sanit said. “All six injured were taken to Thalang Hospital. The rest received first aid at the scene.”

Five of the six injured were treated for minor injuries to their shoulders and backs, he added.

“The one seriously injured was transferred to Vachira Phuket Hospital,” Col Sanit said.

The driver of the pick-up, 35-year-old Kitsata Kantha from Chiang Mai, suffered minor injuries to his right shoulder.

Mr Kitsata told police that he had picked up the workers from a job site in Kamala and was heading back to their camp at Baan Para in Pa Khlok when the accident happened.

“He said he was driving very fast. He lost control and the pick-up suddenly flipped,” Col Sanit added.