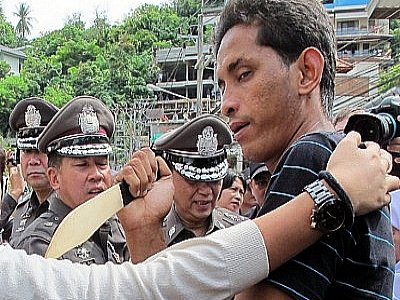 PHUKET: The two men charged with the death of Australian travel agent Michelle Smith, who died from a stab wound inflicted in a bag-snatch in June, yesterday denied all charges against them.

Surasak Suwannachote, 26, and Surin Tadthong, 37, were presented at Phuket Provincial Court to enter pleas to the charges, which collectively accuse the men of murder and gang robbery.

Lt Col Boonlert Onklang of the Chalong Police confirmed to the Phuket Gazette that the specific sections of the Thai Criminal Code the men have been charged with are Sections 339, 288 and 289 (7).

In court, both men were asked whether they confessed to the charges against them.

The judge then scheduled both Surasak and Surin to appear in court again on August 6, to explain in detail about the previous confessions they had made to the police and why they have now pleaded not guilty.

The news follows Deputy National Police Chief Pansiri Prapawat telling some 50 media personnel at a a press conference on June 26 that the pair had confessed to the crime, but said they had no intention of killing Mrs Smith.

Surasak had confessed to stabbing Mrs Smith, resulting in her death on June 20, but said he did not intend to kill her, Pol Gen Pansiri told the press.

Surin had previously confessed to operating the motorbike used in the bungled bag-snatch that fateful night.

Surasak and Surin are now being held at Phuket Provincial Prison.