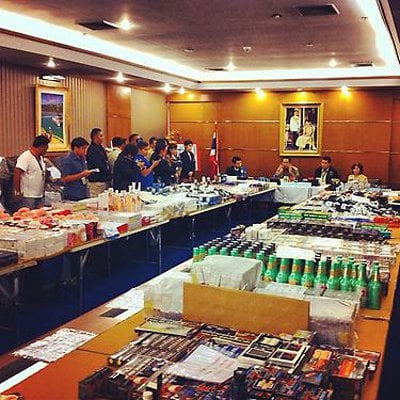 PHUKET: Members of Thailand’s largest ring of traders in aphrodisiacs and sex toys were apprehended in Bangkok with goods worth more than 100 million baht, the Department of Special Investigation (DSI) chief said yesterday.

DSI Director-General Tharit Pengdit and Pol Lt-Col Chinnachot Daengsurisri, commander of the Intellectual Property Crime Bureau, held a press conference today about the arrests made on Saturday at 13 warehouses storing and selling sex-stimulants, and related items to retailers all over Bangkok. The investigation had begun in Yaowaraj, Bangkok’s China Town.

The items found included some 325,000 sex performance pills and other stimulants, and 9,365 pieces of pornographic items and sex toys.

He noted the pills and stimulants seized were not only for boosting sexual desire in men, but also for slipping into women’s drinks so as to heighten their sexual needs to “uncontrollable levels”. The stimulants came in various forms, such as coffee, colourless and odourless drops, and the old classic, Spanish Fly.

The DSI chief said such items were highly dangerous to society, so his officers would continue their investigations in order to prosecute the mastermind of the ring.