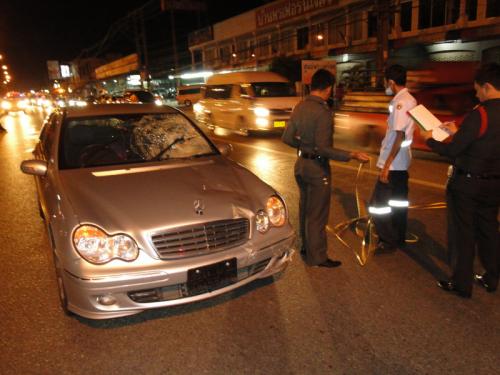 PHUKET: Police are investigating the death of an unidentified man who was hit and killed instantly last night by a Mercedes-Benz as he was crossing Phuket’s busy Thepkrasattri Road.

By the time police arrived at the scene, near the Srisoonthorn Municipality offices, the driver of the Mercedes-Benz sedan, Virat Aumarat, 56, was already en route to Thalang Police Station.

“Mr Virat asked someone to give him a ride and voluntarily presented himself to police,” said Maj Kittiphum Tinthalang.

“He has been charged with reckless driving resulting in death as a precaution while we continue our investigation,” Maj Kittiphum said.

In his statement to police, Mr Virat said that he was driving northward at about 10:30pm when a man descended the median strip to cross the road, pushing his bicycle directly into the path of the car.

“Mr Virat was unable to stop or swerve in time. The man died instantly from the impact,” Maj Kittiphum said.

At the scene, officers found that the man with the bicycle had been carrying a bottle of whisky, Maj Kittiphum added.

“The car has been impounded as evidence while we continue our investigation,” Maj Kittiphum said.