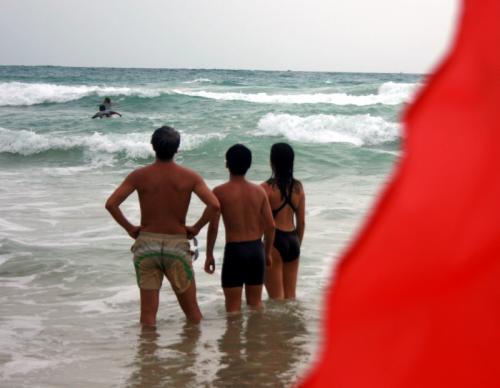 PHUKET: Rescue workers today recovered the body of an 18-year-old who was caught in one of the strong rip currents caused by the super moon that is bringing chaos to Phuket’s beaches.

“The moon is as close to the Earth as it will be this year, which causes more dramatic changes between high tide and low tide, resulting in faster and stronger currents,” Phuket Lifeguard Club President Prathaiyut Chuayuan told the Phuket Gazette. “The effects of the super moon combined with the monsoon season is causing very dangerous conditions for swimming [story here].”

These stronger-than-normal monsoon rip currents pulled Peerapol Nunak, 18, out to sea after he was hit by a big wave at Layan Beach yesterday evening.

Kusoldharm rescue divers, lifeguards and about 50 others on the beach fruitlessly searched for Mr Peerapol last night.

“We found Mr Peerapol’s mother in tears at the beach,” a rescue worker said. “His stepfather told us that Mr Peerapol and six friends had ignored the red warning flags on the beach and gone swimming.

“His friends were able to swim back to shore, but my son was caught up in the waves,” Thawat Penjan, Mr Peerapol’s stepfather, said. “I heard my son crying out for help – a second later he was dragged out by a wave and disappeared.”

Lifeguards searched for Mr Peerapol’s body by jet-ski this morning, after having to give up the search last night.

His body was recovered 200 to 300 meters offshore in the area where he had gone missing yesterday, and pulled from the water at the far end of the beach where tourists would not see it, said the rescue worker.