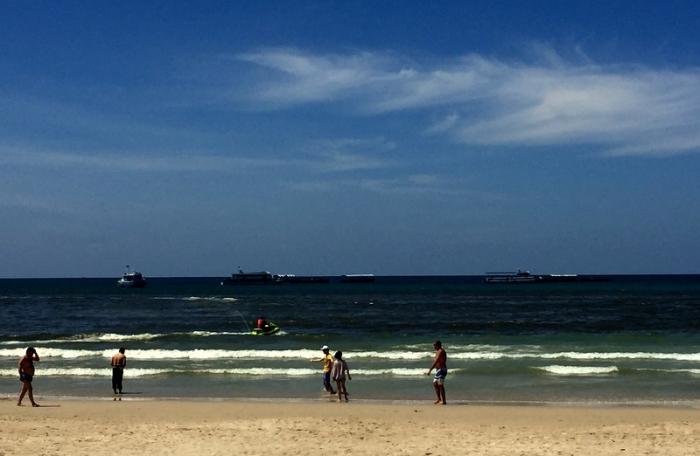 PHUKET: Officials have found an experimental or ‘beta’ solution for the repeated appearance of brown water in Patong Bay, which is caused by a plankton bloom.

Tourists and Patong beach operators complained about the presence of murky water, which they believed was untreated wastewater being discharged from hotels in the area.

However, experts explained that they were plankton blooms, often caused by excessive amounts of nutrients, in the form of nitrogen and phosphorus, spurred on by days of bright sunshine.

The area near Pakbang Canal was the worst affected, but further away from there, the blooms started to fade.

The reason for the presence of excessive amounts of nutrients in the water in the first place, however, does lead back to wastewater.

“We acknowledge that the nitrogen and phosphorus comes from the wastewater discharged into the sea. However, it is thoroughly treated and safe. The biological oxygen demand (BOD) is not more than 20mg, which is a safe level,” Mayor Chalermluck told the Phuket Gazette yesterday.

“The issue is more about our treatment systems. Thailand’s water treatment laws do not clearly specify the amount of nitrogen and phosphorus permitted during treatment. Therefore, even though the water is treated, it still contains these two elements in higher quantities,” she added.

Mayor Chalermluck added that since Patong Bay was not completely ‘open’ sea, the absence of high tides caused the water to be still, which was an additional reason for the presence of excessive nutrients.

This recurring issue has been ailing Patong for many years now (story here, here, and here).

“Environmental experts have suggested growing water hyacinths, which consume nitrogen. We will plant them at the beginning of the canal, before the water starts flowing into the sea,” Mayor Chalermluck said.

Water hyacinths can only be grown in fresh water so experts are now testing the water to determine which part of the bay is fresh water and which is sea water.

“I cannot confirm how long this will take, but rest assured that we are doing our best,” Mayor Chalermluck said. “We are continuously monitoring the water and can assure everyone that for now, it is safe to swim in Patong Bay.”